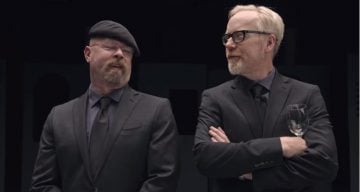 Discovery Channel is a great place to learn new and exciting things. One of their most popular shows was MythBusters, with hosts/experts Adam Savage and Jamie Hyneman as the faces of the show for almost 300 episodes. But, in 2016, the series ended with the original myth-busting duo confirming that they do not want to continue with the show. Here’s why.

If you miss MythBusters, you are not alone. Many fans of the show are wondering, what happened to Adam and Jamie on MythBusters? The two are very well known for having a complicated relationship but always managed to come together for the show. But, after season 14, it was revealed that the two were no longer going to host the show. Here’s where myth busters, Adam Savage and Jamie Hyneman are now.

Years of Blowing Up Just about Anything Imaginable!

On the show, Jaime Hyneman and Adam Savage would determine if various myths were busted, plausible, or confirmed. The duo worked together for 14 years and performed over 2,950 experiments, but were apparently never friends. Could this be the reason for the show’s end? Or did MythBusters end because it ran its course?

“We knew it at the beginning of 2015. So we’ve been filming the last season episodes all year long. I can tell you I’ve been going through all the Elisabeth Kubler-Ross stages of grief—anger, acceptance, denial—it’s all been happening,” Savage said in an interview.

Hyneman added, “We felt like we’ve had really strong material for the whole run. It’s been 14 years and its just time. We want to go out on a strong point.”

And they did! The last episode featured the two MacGyvering a full cement truck to see if it would contain a blast made by 84-lbs of dynamite!

Where is Adam Savage Now?

Adam Savage, 50, was raised in Sleepy Hollow, New York. Before MythBusters, he was an animator, graphic designer, and model maker for films like Bicentennial Man, The Matrix Reloaded, and Star Wars: Episode II- Attack of the Clones.

He even taught industrial design at the Academy of Art University in San Francisco. Since being on MythBusters, Savage dedicated 40 weeks a year to experiments and tests, but he wanted to do something else. “I did the math at some point, I spent something like 25,000 hours filming. There is also some release. I’m tired,” he said.

But he was sure that he did not want to give up the storytelling aspect of his career, and is working on his website, tested.com, which offers insight on some interesting scientific breakthroughs, explores nature, and tries out new things and “anything that’s awesome.”

Tested recently looked into animatronics restoration, and was a total thrill to check out. If you head over to Adam Savage’s Instagram page, you’ll see that he came up with yet another interesting utility bag that is worth taking a look at.

I’ve been dying to tell you about this: I’ve designed and am releasing a product on adamsavage.com on Monday! It’s a utility/tool/travel bag, and I’m in love with it. Hope you will be too!

Where is Jamie Hyneman Now?

The former co-hosts never pretended to be close off-camera. “We like to point out we’ve known each other for 25 years and never once sat down to have dinner alone together. We sort of managed to tolerate each other. I think it’s probably safe to say that continuing our onscreen relationship in front of the camera is probably not happening.” Hyneman said.

Hyneman grew up in Indiana and left home at the age of 14 to hitchhike across the country. He received an honorary Doctor of Engineering degree from Villanova University, Pennsylvania. Along with being knowledgeable in science, he was also a dive master and a boat captain.

Just like his partner on the show, Hyneman worked in the background of various films. Mostly working on special effects, he was a crew member for Top Gun.

Since leaving MythBusters, he moved on to producing shows and is spending more time at his special effects company, M5 Industries, which was featured on the show.