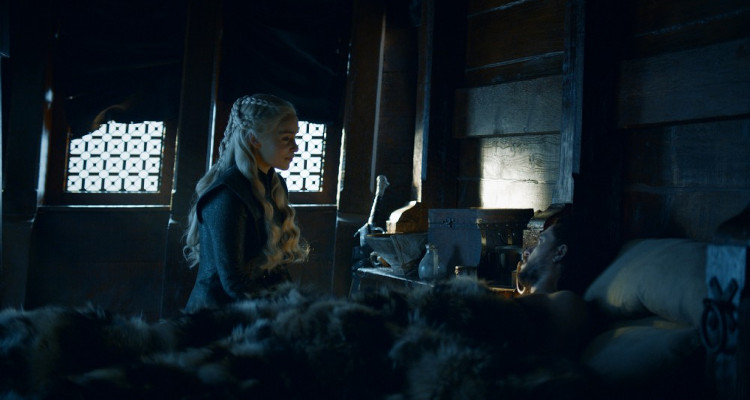 After watching Game of Thrones season 7 episode 6, fans want to know why Daenerys cannot have kids. With the loss of Viserion to the Night King, and Tyrion questioning who she wants as a successor, people are remembering Daenerys’ child prophecy. We have details about Mirri Maz Duur’s prophecy, and the newest Game of Thrones theories surrounding it right here!

When it comes to Game of Thrones, we have learned to expect the unexpected. Cersei is pregnant with another one of Jaime’s children, Tyrion is wondering about who will succeed Daenerys on the Iron Throne, and the Mother of Dragons watched Viserion die.  It seems like Daenerys’ child prophesy is still on her mind, as she even told Jon Snow about her inability to bear children.

Though she once seemed okay with thinking that Rhaegal, Drogon and Viserion will be the only kids she will ever have, things might have changed, especially after the loss of Viserion.

Can Daenerys have babies? Has Mirri Maz Duur’s prophecy been fulfilled? Keep reading for more details about Mirri Maz Duur’s curse and how it will affect Daenerys’ ability to have children.

What Is Mirri Maz Duur’s Prophecy?

#DaenerysTargaryen: This is not life. When will he be as he was? #MirriMazDuur: When the sun rises in the west, sets in the east. When the seas go dry. When the mountains blow in the wind like leaves. #GameofThrones #got #gotquotes

In season 1, after Khal Drogo was brutally wounded, Dany turns to a witch, Mirri Maz Duur, to use her dark magic and save Khal Drogo. Mirri needed to be alone in a separate tent and a blood sacrifice, suggesting Drogo’s horse. The thought of using magic upset one of Drogo’s men, who fought with Jorah, and ultimately died.

In the fight, Dany fell and went into premature labor. Jorah rushed her to the tent where Mirri Maz Duur was performing the ceremony to ask her for help. Dany’s stillborn baby was disfigured.

Meanwhile, Drogo was in a vegetative state. When Dany asked when he would be himself again, Mirri said, “When the sun rises in the west and sets in the east. When the seas go dry and mountains blow in the wind like leaves. When your womb quickens again, and you bear a living child.”

Because of this, it was suggested that Dany would not be able to have children, something reinforced by her stillborn child.

Since Game of Thrones season 7 episode 6, people have come to believe that Dany can actually have children. In the prophecy, Mirri mentions the long winter coming to an end. When breaking down the prophecy, there are clues that Dany might be able to get pregnant. With reference to the sun, fans took to the books where a character we have not seen on screen, Quentyn Martell, travels east to get Dany’s hand, but later dies when he tries to steal one of her dragons. As the Martell sigil is the sun, and Quentyn grew up in the west, only to die in the east, the first part of Mirri Maz Duur’s prophecy was fulfilled.

Another part of this theory is only seen in the book, as Dany visits the Dothraki Sea only to find that the grass and greenery surrounding it was dying. Much like the prophecy suggests. As for the mountain reference, some believe it has something to do with Cersei’s resurrection of The Mountain, while others believe it is a reference to Dany’s dragons who are as large as mountains, and fly in the wind, like leaves.

Another theory making its rounds involves Dany’s journey. This theory has her traveling from the west (Westeros) to the east (Essos), then to the Dothraki Sea, and a blowing mountain (possibly one beyond the Wall) in order to fulfill the prophecy. Though a lot of fans still believe that Mirri Maz Durr cursed Dany into not having children, many more are hoping that this is not the case. The only way to find out is by watching the Game of Thrones season 7 finale on August 27, 2017 at 9:00 p.m. EST only on HBO.