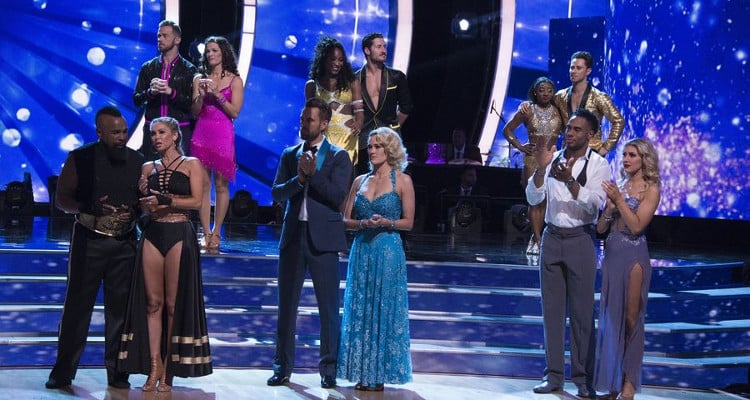 It’s week 3 of Dancing with the Stars season 24. After Chris Kattan and his partner Witney Carson bid adieu to the ballroom last week, another celeb and their pro will be eliminated tonight!

Who Will be Safe from Elimination?

According to Sharna Burgess (pro bull-rider, Bonner Bolton’s partner), it seems the ladies have this season in the bag! Olympic gymnast, Simone Biles, Glee alum, Heather Morris, and Fifth Harmony’s Normani Kordei are the frontrunners of DWTS. But NFL star, Rashad Jennings is also proving that he has the moves to sweep the ballroom. Some DWTS viewers name former Bachelor, Nick Viall and pro-bull-rider, Bonner Bolton as the underdogs this season, as well.

Simone Biles and Sasha Farber continue to dominate the leaderboard with their high scores. Their exciting cha cha on Jessie J’s “Burnin’ Up” burned up the dance floor and they earned a total score of 29 out of a possible 40. Heather faced a little setback when her partner, Maks Chmerkovskiy, was out due to an injury. But she still managed to deliver a mind blowing jive with her new partner, Alan Bersten and placed second on the leaderboard with a total score of 30. Normani and Val, along with Rashad and Emma were tied for first with 32 points.

With such amazing scores in week 2, these celebs don’t have to fear elimination yet. Also looking safe is former ice-dancer, Nancy Kerrigan and Real Housewife-turned-pop-diva, Erika Jayne with their tied score of 28.

Who Could Get Kicked Off DWTS Tonight?

Bonner & Sharna slowed down things with a Viennese Waltz. Technique aside, these two lit up the ballroom with their chemistry. People are buzzing about the pair, with speculations of a possible romance brewing. Nick and Peta on the other hand, only scored 25 for their slightly clumsy foxtrot, though Nick’s hard work still shines in the ballroom. With these two charming men, it’s hard to predict how far they’ll go. But that’s the thing about underdogs!

The celebs on the brink of elimination after week 2 are Charo, Mr. T, and David Ross. Ironically, they are the oldest contestants this season. However, age has nothing to do with the ballroom as Donny Osmond, the oldest winner in DWTS, has proved. These couples are at the risk of going home because they have yet to bring it to the ballroom.

Charo and Keo tapped into the Spanish dynamo’s roots with a Paso Doble and scored a 25, just like Nick. She’s got a winsome personality, energy, and has the most fun while dancing. But it hasn’t yet translated into her scores and votes. After being in the bottom two last week, she’s at a risk to go home this week.

Mr. T and Kym Herjavec improved by two points last week and the beloved pop culture icon is popular enough to get votes. We can really see that he’s trying hard, too. But it’ll be a challenge for him to make it far in DWTS with the competition so tough this season!

David Ross and Lindsay Arnold aren’t doing badly, either. They’re nothing if not consistent! The former MLB catcher knows he needs to work on his dancing, and knows that he needs to give it his all. Sadly, in a competition where scores and points matter, his chances look bleak unless he can step it up this week!