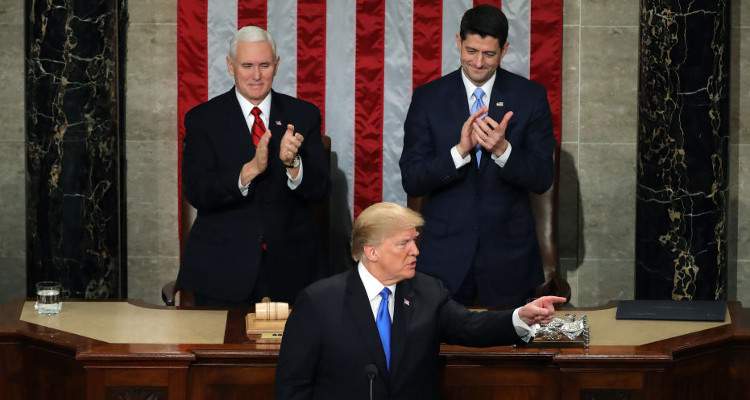 President Donald Trump gave a promising speech at the State of the Union Address yesterday. During the address, he shared his plan for the coming year, and expressed hope of working in alliance with the Democrats. But who was sitting behind President Trump during the address? Find out more about it below.

Who Was Sitting Behind the President at the State of the Union Address?

During the address, he highlighted “four pillars” of immigration limits, and targeted key topics such as America’s stance on North Korea and crime gangs. He also spoke about his overall plan for the coming year and expressed his desire to work with the Democrats.

Throughout the address, Trump was backed by the Speaker of the House and Vice President, quite literally. So, in case you were wondering who was sitting behind him at the State of the Union, it was our very own Paul Ryan and Mike Pence!

Trump’s rather exciting speech lasted for about one hour and 20 minutes and was carefully heard by all the major players in Washington, including the Supreme Court justices, Cabinet, and media.

While there is no rule requiring congressmen to be seated in a certain way at the State of the Union Address, the President is always backed by the Speaker of the House and Vice President. The Cabinet members and Supreme Court Justice sit right in front of him, whereas the First Lady and guests sit further to his left.

Who Is Paul Ryan?

Paul Ryan, born Paul Davis Ryan Jr., is a politician who is currently serving as the 54th Speaker of the United States House of Representatives since 2015. He replaced John Boehner and is the first person from Wisconsin to hold this position.

Throughout his political career, Ryan won several awards, including the coveted Legislator of the Year Award by the International Franchise Association and the Leadership Award by the Jack Kemp Foundation.

Ryan’s political stance is mostly conservative, with a primal focus on fiscal policies. He was seated behind President Trump during the State of the Union Address.

Who Is Mike Pence?

Little introduction is needed for Mike Pence as he is a well-known politician and lawyer, who is also currently the Vice President of the United States. Born and raised in Columbus, Indiana, politics caught Pence’s eye from an early age.

Apart from his vice presidency, Pence also served as a Member of the United States House of Representatives and was also the 50th Governor of Indiana from 2013 to 2017.

Mike Pence is known for his rational approach and often takes strong stands on issues such as LGBTQ rights, immigration, and social security. He was also seated behind President Trump during the State of the Union address.