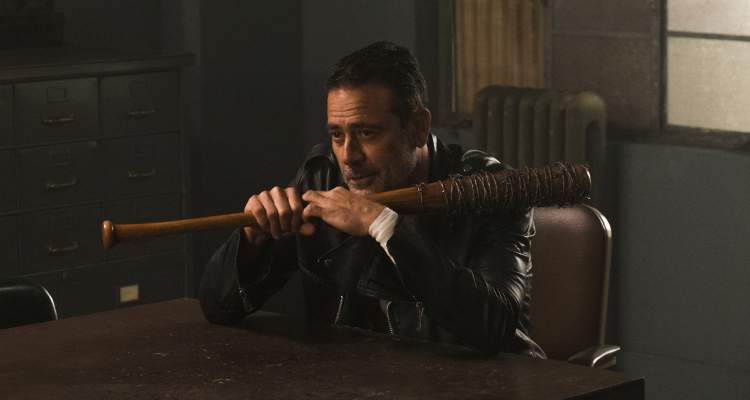 The Walking Dead mid-season finale promised to have some “shocking” events unfold. And shocking it was! Who just died on The Walking Dead? If you have missed the latest on TWD, fair warning, this piece contains spoilers.

Even avid fans who read the TWD comic books can’t guess what’s going to happen on the show. As we saw last week, Daryl plowed through Negan’s Sanctuary, flooding it with walkers hoping they would kill the Saviors. Meanwhile, Rick sets out on his plan—which he has been working on for most of season 8— to get Negan’s crew to surrender. What he finds is a breached Sanctuary with no sign of a walker herd.

Season 8, episode 8 opens with a flashback of Carl telling Rick that they need to fight for peace in the long term. “Finding some way forward? That’s part of it. That’s how it’s gotta be,” Rick plays the conversation on his mind during the ride back while Negan is whistling and driving elsewhere.

Aaron and Enid are driving to Oceanside to convince them to ally with Alexandria. Aaron has Eric, who we last saw joining a herd of walkers, on his mind.

They fight assailants in Oceanside which ends with Enid shooting their leader. That same night, Carl is up to something while loading things into a sewer. But before Michonne figures it out, Negan makes a ruckus outside the metal gates.

He demands everyone to line up, open the gates, apologize, and prepare to be killed. At the end, he claims he’s going to kill Rick in front of their eyes. And he gives them three minutes to comply. Before we knew it, Rick, Carol, and Jerry (King Ezekiel’s man) are driving when their vehicle is crashed. And here we think up the worst-case scenario.

While Jesus and Maggie are leading a caravan of Hilltop people, they are stopped by Saviors who bring out Jerry holding a gun to his head. Maggie and Simon, who’s leading the Savior group, are talking about the Saviors taking over the Kingdom and Alexandria. During this, Simon kills the man seated in Maggie’s car. This unknown man is the first casualty of the episode.

At that time, Carl is making his escape plans intending to let Negan have Alexandria. But somehow, he’s confronting Negan during which, Alexandrians break out a retaliatory convoy. That leaves Negan to order his men to open fire. Carl tries to seek refuge but there are explosions around him everywhere and we can’t tell what’s happening to him.

Not long after, Negan is driving through Alexandria reveling in the burning structures. He orders a hunt for Carl while he takes up residence at Rick’s place. No word on where Rick is while Maggie is killing imprisoned Saviors and ordering everyone at Hilltop to get armed for the last stand.

After much suspense, Rick finally arrives in a burning Alexandria looking for his family. Sure enough, he comes face to face with Negan in his home and they get into a fistfight. During their fight, Negan narrates his plans for Carl, letting Rick grab his gun and escape.

He soon finds Michonne, who’s killing walkers and Saviors while looking for Carl, and pulls her to the sewers where Carl, Judith, and other Alexandrians are safe. A montage shows what each character is going to do when Carl reveals to Rick that he was bitten by a walker. The mid-season finale ends with Rick and others’ horrified faces after knowing Carl is infected.

For now, there are no big deaths other than innocent man, Neal in Maggie’s convoy, and the Savior she killed as payback. But we are wondering if things look bleak for some other characters. Ezekiel and Dwight are in danger of dying before anybody in Alexandria.

But nothing prepared us for Carl getting infected. As it goes in the TWD universe, getting infected is as good as dead. However, showrunner Scott M. Gimple said in the aftershow, Talking Dead, “Carl right now is alive and he has some business to attend to.” So yeah, Carl’s not going anywhere until he’s done, which is great news for fans.

Nevertheless, he might have to ready our hearts to say farewell to Carl as Gimple added his infection is “a one-way ticket but I’d like to think that the things that we see in the next episode are so important to his life and the other character’s lives.” We’ll have to wait until the mid-season premiere next year to find out Carl’s endgame.

One death we’re sure is coming soon will be Morgan Jones. It was announced that Lennie James’ character would be leaving TWD in season 8 to join the cast of Fear the Walking Dead.

The Walking Dead will reveal what happens to a core character on February 25, 2018, only on AMC.