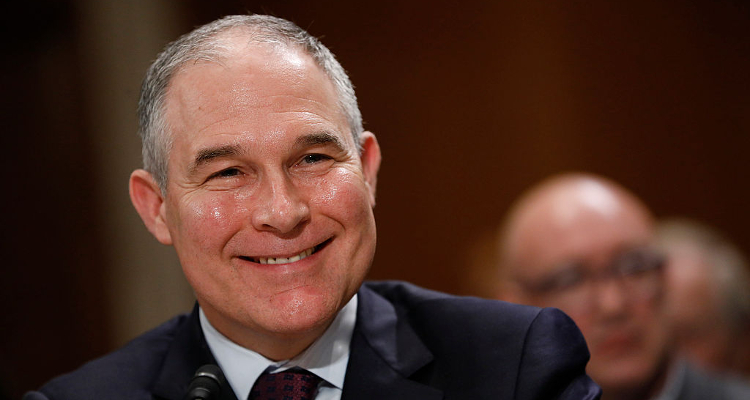 Amid protests from the Democrats and the Environmental Protection Agency (EPA) staff itself, President Donald Trump and the Senate approved the appointment of Scott Pruitt as the head of the department. Who is this divisive pick of the Trump administration? Find out here.

On Friday (February 17), the Senate confirmed the appointment of Scott Pruitt as the Administrator of the Environmental Protection Agency (EPA) to some protest. The Democrats and EPA workers themselves disagree with his appointment. While the Democrats tried to block his confirmation during committee hearings in the Senate, EPA officials signed a petition to urging the Senate to reject his appointment. Nevertheless, Pruitt took charge of the agency and addressed the EPA and media on Tuesday (February 21). His short address created some controversy. Who is Scott Pruitt and why is his appointment to the EPA so unpopular? Here’s everything you need to know about him in Scott Pruit’s wiki.

He was the Attorney General of Oklahoma

Pruitt was born and raised in Kentucky, where he studied political science and communications at Georgetown College. He then moved to Tulsa, Oklahoma where he earned his Juris Doctor from the University of Tulsa. Pruitt specialized in constitutional law, contracts, insurance law, labor law, and litigation and appeals in private practice in Tulsa.

The 48-year-old was elected to the Oklahoma State Legislature in 1998, where he served the legislature for eight years. During his time in the legislature, he rose to prominence in the Republican party. He ran for a seat in the U.S. House of Representatives in a special election in 2001, but lost the bid. In 2006, he ran for lieutenant governor, but lost once again.

Pruitt ran for the post of Attorney General of Oklahoma in 2010 and won the Republican primary defeating two other strong contenders. He then went on to defeat the Democratic nominee, Oklahoma City’s defense attorney Jim Priest. He served as the Attorney General until his appointment as Administrator of the EPA on February 17, 2017.

Compared to President Trump’s other appointees, Pruitt’s personal wealth is not much. According to an article by Vanity Fair, his net worth is assumed to be “barely $1 million in investible assets; $5 million at best.”

Pruitt spent a fair amount of his Attorney General tenure suing the very agency he now heads. After being elected to the Attorney General’s office, his first order of business was to dissolve the Environmental Protection Unit, calling it “operationally inefficient.”

In six years, Pruitt sued the EPA more than a dozen times, including lawsuits against EPA’s Clean Water Act and regulations on coal-fired power plants. He claims the EPA was overstepping its boundaries. “What concerns the states is the process, the procedures, the authority that the EPA is exerting that we think is entirely inconsistent with its constitutional and statutory authority,” he told the Washington Post. All his lawsuits against the EPA were dismissed.

Pruitt is more than just a legal opponent of the EPA. The former Attorney General served two terms as President of the Republican Attorney Generals Association. His work with the organization is enough to raise eyebrows from environmentalists. He successfully raised campaign contributions for the association over the years —around $300,000 from the oil and gas industry.

Add that to the fact that he’s a climate change denier, who said the debate about global warming is far from settled, explaining that, “We don’t know the trajectory, if it is on an unsustainable course. Nor do we know the extent by which the burning of fossil fuels, man’s contribution to that, is making this far worse than it is.”

Pruitt was ordered by the Oklahoma District Court to release thousands of emails of communication with fossil fuel industries. He delivered the first batch of more than 2000 emails to the watchdog group that filed the case two years ago. These emails raise the question of whether he’s too closely tied to the oil and gas industry to head the EPA.

His climate change denial doesn’t sit well with EPA officials. During his confirmation hearing for EPA administrator, Scott Pruitt stated, “the climate is changing, and human activity contributes to that in some manner.” However, during his address on Tuesday, the word “climate” was never uttered in his speech. In fact, his outline of new principles for the agency to compromise with extractive industries is facing a lot of criticism.

Many believe Pruitt’s appointment to lead the EPA is Trump making good on his campaign call that climate change is a hoax propagated by China. They’re also not happy about Pruitt talking about the EPA compromising with fossil fuel industries that he has close ties with. “Scott Pruitt running the EPA is like the fox guarding the henhouse,” said Gene Karpinski, president of the League of Conservation Voters, which supported Hillary Clinton in the presidential election.

He’s a Football and Baseball Fan

In high school, Pruitt was a standout baseball and football player. He even went to the University of Kentucky on a baseball scholarship, where he played second base. Baseball offered him a haven when he was campaigning to be lieutenant governor. He dreamed of playing for Cincinnati Reds in major league baseball.

Pruitt and his mentor, Bob Funk, a well-known Republican donor, bought a controlling interest in the Oklahoma City RedHawks (now the Oklahoma City Dodgers) minor league baseball team for a reported $6.8 million in cash. Pruitt became the managing partner with 25% ownership of the club, until the duo sold the team in 2010. While he was the owner, Pruitt stated that the team “regularly rated among the league’s leaders in attendance and merchandise sales.”