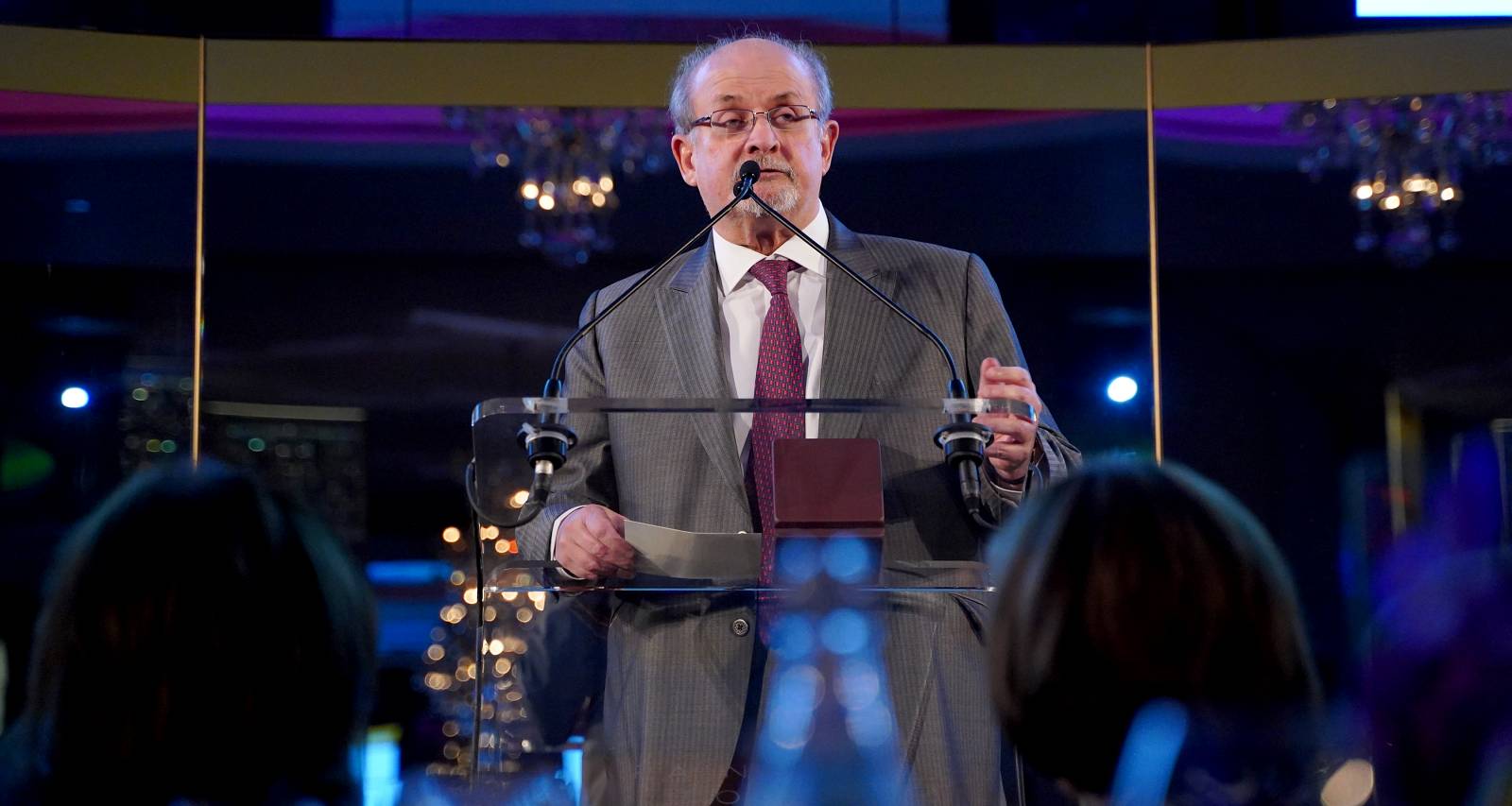 Sir Salman Rushdie speaks onstage at the Guild Hall Academy Of The Arts Achievement Awards 2020 at the Rainbow Room on March 03, 2020 in New York City. (Photo by Sean Zanni/Patrick McMullan via Getty Images)

Who is Salman Rushdie? His is a name that may not be familiar to those who follow the lives of celebrities; after all, he has no involvement in films or television, outside of the occasional guest appearance or interview, and yet Salman Rushdie’s net worth is believed to be around $15 million.

However, the famed essayist and novelist—yes, that’s what he does—recently appeared in the headlines after his ex-wife of three years, Padma Lakshmi, opened up about what being married to Salman Rushdie was like and what went wrong in the end.

In an interview, Lakshmi, herself an author as well as an actress, producer, and TV host, explained how she met Rushdie, a British-Indian, in 1999, equating him to India’s version of Ernest Hemingway. Absolutely enthralled by the man, she saw herself, who at the time only had a published cookbook to her name, as someone who was out of his league and unprepared for his attention. Her admiration, combined with his way with words, saw a first date that started in Central Park and ended in bed.

The two moved in together in 2000, but he began to have issues with her increasing fame and with the fact that she was no longer constantly near him. She also came to be afflicted with severe endometriosis, where tissue from inside the uterus grows outside, which hampered their sex life and made things even more difficult and caused many (verbal) fights.

Salman Rushdie, outside of his ex-wife, has of course had a stories history that has built up his net worth. Born to a Muslim family in Bombay, he first got a job in his industry as a copywriter at an advertising agency before becoming a writer full-time. His first book, a sci-fi novel called Grimus, was released in 1975. The couple would eventually divorce in 2007, but remain friends.

His most famous work is The Satanic Verses, his fourth novel, which was released in 1988. Partially inspired by the life of the Prophet Muhammad, the book was highly controversial the world over and despised by many Muslims, who felt it made fun of their religion and was an act of blasphemy. The hatred some had for the book eventually reached the point that a fatwā, a ruling on Islamic law, was issued by Ayatollah Ruhollah Khomeini, the Supreme Leader of Iran at the time, who said that Rushdie and his publishers should be killed. The author was given constant police protection and managed to avoid injury, though his publisher (shot three times, but lived) and the Turkish translator (planned target for the Sivas massacre that killed 37, escaped) were not so lucky.

Besides his written work, which includes 10 novels, three collections, two kids’ books, and 10 essays and non-fiction pieces, Salman Rushdie’s net worth has occasionally been supplemented with minor film and television appearances, twice in works originally based on books, namely the film adaptations of Bridget Jones’s Diary and Then She Found Me. He also worked on the screenplay for the 2012 film version of his Booker Prize-winning novel Midnight’s Children and is reported to be working on a series of his own creation for Showtime called The Next People.