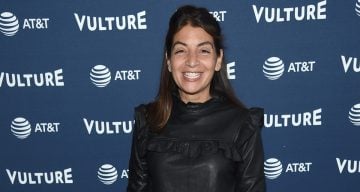 Mary Giuliani attends the Vulture Festival Presented By AT&T Opening Night Party at The Top of The Standard on May 18, 2018 in New York City. (Photo by Jamie McCarthy/Getty Images for Vulture Festival)

When Bradley Cooper and Matt Damon want to serve the best food at their parties, they call Mary Giuliani, caterer to the stars. She recently appeared on The Rachael Ray Show, where she dished some snazzy one-bite recipes that will liven up your holiday parties.

New York-based chef Mary Giuliani stopped by The Rachael Ray Show and also got many wondering if she has a connection to another famous New Yorker. Is Mary Giuliani related to Rudy Giuliani, the former Mayor of New York and President Trump’s current attorney? Our Mary Giuliani wiki answers that question and more!

Who Is Mary Giuliani?

Forty-two-year-old Mary Giuliani, whose family hails from Montauk, New York, is the owner of Mary Giuliani Catering & Events. This chef and author is famous for her finger food recipes. She most recently shared how to make bite-sized pasta dishes for parties on The Rachael Ray Show.

Is She Related to Rudy Giuliani?

Mary shares her last name with former New York Mayor Rudy Giuliani, who is currently President Trump’s attorney. It has prompted many to ask if they are relatives in any way.

However, several publications have pointed out that the chef and the controversial lawyer are not related. And neither Mary nor Rudy are related to Woodbury, Minnesota mayor Mary Giuliani Stephens.

Her Family Is Established in the Hospitality Industry

Franklin and Lucille Jarmain, her grandparents, established Montauk’s Wave Crest Motel. Lucille, an entrepreneur and pianist, built several hotels and was head of Montauk Chamber of Commerce for years.

Her family remembers her as the life of the party. Mary remembers her fondly and is hoping Lucille Jarmain’s life will be immortalized on the big screen one day.

Mary’s entire family knew how to liven up any event. Her fondest childhood memories include vacationing with her mother, Nancy, father, and sister at Wavecrest Resort in Montauk.

Her father was in a band, Robin and the Twisters, and that was how he met his future wife. He also instilled a love for hot dogs in his daughter, who would go on to author Tiny Hot Dogs: A Memoir in Small Bites.

Mary graduated from Georgetown University, where she majored in English and theater. She later spent a year in Florence, Italy, learning all she could about Italian cuisine, culture, and wine.

She originally tried to make a career in acting. But after being fired from several jobs, she landed a temporary job at a catering company and realized it was her calling.

#livelikeanitalian issue of @rachaelraymag hits stands TODAY!! ??❤️? #Repost @rachaelraymag with @get_repost ・・・ "If you want to enjoy your life more, you might try living it more like an Italian," @rachaelray says. Pick up your copy of our #Italian issue today and watch Rach and @mary_giuliani chat all things Italian through the link in our bio! ?? #ItalianEveryDay

She Launched a Catering Company with Her Husband

Mary married Ryan Giuliani in 2001, when she was 24, and they are parents to an adorable girl named Gala. Mary and Ryan are also business partners as co-owners of Mary Giuliani Catering & Events.

Ryan is a wiz in photography production. He also had a brief career in real estate. He used his past expertise to launch his wife’s business.

Happy Anniversary @rgiuliani98 18 years !!! Wowsa! ✨✨Love you with my life and grateful for every single bit of it ✨✨

They founded the company four years after they married, in 2005, and together they host some standout parties. Mary is the face of the company and has a knack for keeping her guests entertained with her food, funny stories, and out-of-the-box ideas. They’ll go as far as constructing a four-foot-tall ferris wheel to serve mac-n-cheese.

She penned her first book, The Cocktail Party (Eat, Drink, Play, Recover), in 2015. Besides being a regular guest on The Rachael Ray Show, she’s also appeared on TV shows like The Barefoot Contessa, The Chew, The Today Show, Moltissimo, and Good Morning America.

According to a 2015 lawsuit filed by former employees of the catering guru, Mary rakes in about $500,000 in annual sales. At that time, the claim alleged, Giuliani’s catering company reportedly did not pay the staff tips earned for their work.