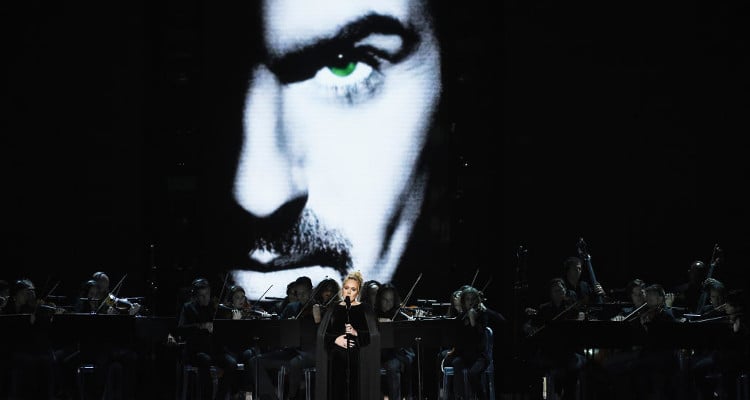 Was Adele close to late singer, George Michael? Or was her touching tribute based on his impact as an artist? We have the information below, as well as the Adele tribute to George Michael video.

This year’s Grammy Awards showed Beyoncé making her first appearance after announcing her pregnancy, and giving a powerful performance, showcasing her baby bump. Adele also paid tribute to late singer, George Michael, begging the question: did Adele know George Michael? Were Adele and George Michael friends? We have the details on that, and more, right here.

Adele even has the cross earring just like George Michael. 😍#GRAMMYs pic.twitter.com/DBq9jbhaNU

George Michael passed away last Christmas, and to pay tribute to him, Adele performed “Fastlove” during last night’s (February 12) Grammy Awards. Soon after she began, Adele was off-key and, after letting a few profanities out, restarted her performance, “I’m sorry for swearing and and I’m sorry for starting again,” Adele said, “I can’t mess this up for him. I’m sorry, I can’t”.

Following her performance, many people on Twitter wondered if Adele and George Michael were friends.

George Michael would be so elated and proud of this moment! He deeply respected Adele's talent. #GRAMMYs

A tweet from the Recording Academy about Adele’s performance fuelled the question of who George Michael to Adele.

Adele and George Michael were friends before his untimely death last December. Adele often referred to George as her hero. In May 2015, on her 27th birthday, Adele dressed as the “Faith” singer. The tribute photo then prompted George Michael to return the love, as he posted a special shoutout for Adele via Twitter, saying he was “flattered” by the display.

Despite faltering, Adele’s second run-through of George Michael’s “Fastlove” was heartfelt, and earned the singer a standing ovation. Take a look at Adele’s tribute to George Michael video below.