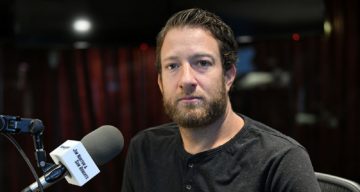 Barstool Sports’ El Pres, Dave Portnoy, has a new girlfriend in 2021. The younger woman spotted a few times with Portnoy is identified as Shannon St. Clair. They’ve been together at least since November 2020. The gorgeous Shannon St. Clair has her own connection to professional sports as a former Philadelphia Eagles cheerleader. But social media users are eager to know more about who Shannon St. Clair is. So, we reveal the details on Dave Portnoy’s girlfriend here.

Shannon Marie St. Clair was born on March 14, 1996, and is a native of Pennsylvania. Her mother, Donna Romano Lynch, and her step-sister, Kylie Mcilwain, are based there.

Donna Lynch is the owner of Shooting Star Archery Academy in Pipersville. She is also a licensed realtor in the area.

The same year, she enrolled in the Fox School of Business and Management at Temple University. She graduated in 2019 with a BBA in supply chain and management.

The Philadelphia native is best identified as a professional NFL cheerleader from 2016 to 2018. She was an Xfinity Live! Eagles cheerleader for a year and a half.

St. Clair balanced studies with cheerleading and working on the side. She was a bartender and hostess at a night club from 2015 to 2018.

In 2018, she joined a Philadelphia-based firm, Lux Living Interior Designs. She was an executive assistant there until September 2020.

St. Clair began working for Ronin Construction Group as a controller that same month. But she was only there for four months.