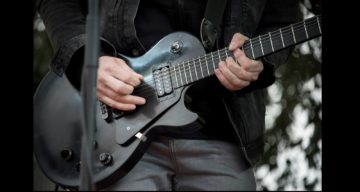 Three American Idol hopefuls head to the finale on May 23. Among them is Chayce Beckham, the former machinery operator who has amazed with his rock and folk renditions of popular songs. Recently, Beckham earned praise for his original composition, which is sure to become a hit soon. His rising fame has many discovering him and asking who Chayce Beckham is. So we reveal more about the American Idol finalist here.

Chayce Beckham was born in 1997, and hails from California. He is one of three children born to Windie Peterson.

Chayce and his sisters, Tiffani Beckham and Madison Beckham, grew up in Apple Valley. Tiffani is a realtor based in Oklahoma.

Petersen, a realtor in California, appeared on American Idol on Mother’s Day through a video call from her California home. Chayce serenaded her with his original tribute song, “Mama,” while apologizing for his past run-ins with the law.

Chayce Beckham was part of the reggae band The Sinking Sailors before he came on Idol. They have an album on iTunes and booked all kinds of gigs in the San Gabriel Valley.

Beckham had to move into his mother and stepfather’s home when he had a difficult year. He lost his longtime girlfriend and his dog passed away in the same year.

The Sinking Sailors also disbanded, though their social media pages are active. They even showed their support for Beckham on the show.

All the setbacks led to Beckham turning to alcohol. He admitted that it became problematic to the extent that he was drunk driving once and flipped over the vehicle. He was charged with a DUI that is still pending.

He got a job as a forklift operator, and claims he essentially played with life-sized Tonka trucks all day. His American Idol bio says he worked in sales.

While he was living with his mom Petersen and her husband, they encouraged him to audition for American Idol. He auditioned with Kolton Moore & The Clever Few’s “What Brings Life Also Kills,” and was selected.

Beckham has made it to the Top 3, and could potentially win season 19. On May 16, Beckham performed his debut original track, “23,” on the Idol stage.