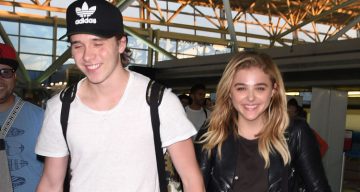 Brooklyn Beckham has made headlines recently by splitting with his on-again-off-again girlfriend, Chloe Grace Moretz. The 17-year-old reportedly broke off with Moretz a few weeks ago, after the young couple couldn’t work out their long-distance relationship issues.

David and Victoria Beckham’s eldest son began dating the 19-year old American actress back in 2014, when the Beckhams were living in Los Angeles. The teens were often spotted skating together and attending events together. Briefly in 2015, sightings of the couple together were few and Brooklyn was getting closer to a french model. In early 2016, Brooklyn and Chloe were once again spotted rekindling their romance in London. Around that time, the soccer star and Posh Spice had relocated with their children to London. Brooklyn and Chloe continued their relationship and were even said to be completely smitten with one another.

The actress had a big career in the U.S. and Brooklyn attended school in London, as his family was there too. Even so, the couple tried to keep a long-distance relationship going. All was dandy for a while, until the pressures of their transatlantic relationship caught up with the teen celebs. Moretz reportedly wanted more, and given that Brooklyn lives in a different continent from her, Brooklyn called it quits.

Brooklyn is definitely basking in the attention he’s getting. The son of the famous power-couple has taken to Instagram to show just how good-looking he is. He has over 6 million Instagram followers and posts at least once a day. This 5 ft 8 teen, who’s still in his growing phase, has posted shirtless videos and photos of himself on Instagram, making his female followers go crazy over his chiseled body.

Fans who are curious about the soccer star and the spice girl’s eldest son have come to the right place. Here are some interesting facts about Brooklyn Beckham.

Named after the New York Borough

Big surprise there! Brooklyn was named after the most populous borough of New York because he was conceived there! David and Victoria were stateside for a while when the Spice girls were touring in 1998, and Brooklyn was where ‘Brooklyn’ began!

Brooklyn and his little brother, Romeo have quite the distinguished godparents. Along with Victoria’s brother and sister, British actress Elizabeth Hurley and legendary musician, Sir Elton John are the godparents to the older Beckham boys! The choice of godparents caused quite a feud within the Beckham family when the children were small. Back then, David’s father and sisters were quite upset about being sidelined, while Victoria’s side of the family and some others who weren’t even relatives were taking the lead.

Brooklyn may have his father’s swagger and good looks, but he’s a complete Mama’s boy. The teen is often spotted with his mom on ‘mother-son dates,’ and also accompanies Victoria to star-studded events such as the Harper’s Bazaar Women of the Year Awards. Posh Spice and her son also post funny pictures on their Instagram accounts, showing the good rapport they have.

When Brooklyn was 15 years old, he took up a part-time job at a West London coffee shop, where he was paid roughly $ 3 an hour. Victoria said Brooklyn decided to earn his own money instead of depending on his parents so he could gain good work ethic. Brooklyn’s part-time job also earned him praise as a teen role model.

The 17-year-old has had a few modeling stints, but apparently he’d rather be behind the camera than in front of it. The aspiring photographer has shot a few photo-shoots and was hired by Burberry to take photos for their 2016 photo-shoot ‘#ThisisBRIT’.