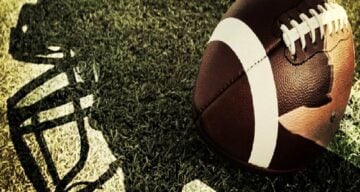 Dalton Risner’s philanthropy tends to get more attention than his game. Meanwhile, Dalton Risner’s wife, Whitney Risner, is also drawing attention on social media. Whitney Risner is the Denver Broncos star’s long-time girlfriend-turned-wife. Her TikTok is where the party is at! Her claim to fame was posting gameday clips on the platform, particularly of their customary kiss they share over the wall, which is a viral hit among NFL fans. It’s made her a polarizing WAG among Broncos Nation, but the former athlete doesn’t let the hate get to her. Dalton Risner’s wife deserves her time in the spotlight in this Whitney Risner wiki.

Whitney Marie Risner (nee Clampitt) was born on December 19, 1998, and hails from Chillicothe, Missouri. She’s one of two children born to Kristy and Cory Clampitt.

She and her brother, Tyler Clampitt, were student-athletes growing up. Their mother is a middle school teacher. Meanwhile, their father farms soybean.

Dalton Risner’s wife, Whitney Risner, was a basketball and track and field athlete at Chillicothe High School. She attended Fort Hayes State University, where she was on the basketball team roster for the 2017–18 and 2018–19 seasons. She graduated with a bachelor’s degree in business, management, and marketing in 2021.

Since 2021, Whitney Risner has earned fame as a social media star. She’s a lifestyle influencer signed with J1S Talent.

As of 2022, she goes by Whitney Marie Risner on Instagram and TikTok. She has over 89.4k Instagram followers and over a million followers and growing on TikTok. Moreover, she’s worked with Snickers and Revolve and appeared in New York Fashion Week. So it’s no surprise she’s using her expertise in handling the social media marketing for the RisnerUp Foundation since 2019.

From social media, she’s expanding to business and design with the launch of her jewelry line, WaaWees. The name originated from Whitney’s childhood when she mispronounced her name, Whitney Marie, as “WaaWaaWee.”

She’s loved jewelry since she was a child, and in college, she crafted handmade jewelry she sold domestically. Her dream is now bigger, building a sustainable brand through WaaWees and creating sterling silver pieces at affordable prices.

The Fort Hayes basketball athlete had heard of Kansas State footballer Dalton Risner in passing. However, they would meet at the Lake of the Ozarks, where her parents have a home, and she had a summer job, and Risner was vacationing.

After that meeting, Risner slipped into her DMs. But the basketballer wasn’t single at the time and friend-zoned Risner.

A year later, she was newly single and found out Risner was in the Ozarks and reached out to him via Snapchat, which led to romance.

The Denver Broncos selected Risner in the 2019 NFL draft, and they maintained a long-distance relationship while the basketball player continued college. She was initially not ready to settle down at that time.

“He was going to the NFL. I was a basketball player and nursing student,” she said. “I was like, ‘What does this guy want?’ I was like ‘Go enjoy yourself. Why are you trying to make this work?’ He was very patient and I was immature. He kept being persistent and showing me who he was, and I’m glad it all worked out.”

They worked on Dalton Risner’s RisnerUp Foundation and spent much of their downtime together. When Dalton Risner proposed in 2021, his girlfriend said yes. They married on June 19, 2022.