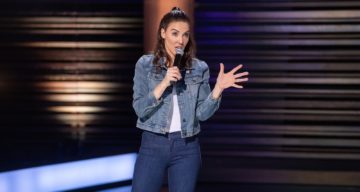 Whitney Cummings in her Netflix Comedy Special "Can I Touch It" Photo: David Giesbrecht/Netflix

Whitney Cummings is here with her own Netflix stand-up comedy special, Can I Touch It?, which premiered on July 30, 2019. This unabashed comedienne has made a pretty penny as an actress and producer. And her new stand-up special is sure to add to her estimated net worth of $15.0 million. She knows a thing or two about making people laugh and raking in the dough. And we’ve got the details on how she does it.

Whitney Cummings was born on September 4, 1982 in Georgetown, Washington, D.C. Her mother, Patti Cummings, worked as a PR director at a Neiman Marcus. Her father, Vince Cummings, was a venture capitalist, who passed away in 2017. Whitney Cumming’s parents divorced when she was quite young, five years old.

Cummings would later move to Los Angeles to pursue her entertainment career. There she made her debut on Punk’d; one of the many comedians/actors to kick-start their career on Ashton Kutcher’s MTV show. She has pranked celebrities like Chris Klein, Adam Brody, and Vivica A. Fox.

The same year, 2004, she starred in a low-budget film that was screened at Cannes, EMR.

Whitney Cummings began performing stand-up comedy in 2004, quickly getting her name out there. She gained visibility with her many appearances on TV comedy shows, including Best Week Ever with Paul F. Tompkins and the audition portion of Last Comic Standing.

Don’t be jealous you didn’t think of it! My new special CAN I TOUCH IT? is now streaming on @netflix ! #canitouchit @netflixisajoke @whitneysrobot

Cummings is also a regular on episodes of Comedy Central Roast. Some of her subjects have been David Hasselhoff, Joan Rivers, and then real estate tycoon Donald Trump.

Cummings’ acting took off steadily with her role in the movie Made of Honor and appearances in multiple TV shows. But it was in 2011 that she made her claim to fame with two popular sitcoms, 2 Broke Girls and Whitney.

She is the creator and executive producer of the CBS sitcom 2 Broke Girls, along with Sex and the City creator Michael Patrick King. Starring Kat Dennings and Beth Behrs, the successful sitcom became famous for its unfiltered jokes before it ended in 2017, after six seasons.

Whitney was another multi-camera sitcom of which Cummings was the creator and executive producer. She starred in it herself for two seasons before it was canceled in 2013. Though critics panned it, the show had audiences falling in love with Whitney Cummings.

Cummings was also a co-showrunner for the Roseanne revival.

So far, 2 Broke Girls marks her biggest success, reportedly earning her $45.0 million as producer. On top of that, the comedian/producer was paid $60,000 per episode of Whitney.

Here’s how Whitney Cummings compares to other comedians with diverse ventures.

Cummings Bought a New House in 2019

Whitney Cummings is far from a “broke girl.” The comedian brings in earnings through her stand-up, writing, producing, and acting ventures, as well as lucrative endorsement deals like a previous one with Tinder to launch its “Reactions” feature.

And she’s making good use of her riches, like spending on a gorgeous gated estate in Woodland Hills, California in May 2019. The 6,800+-square-foot home comes with a price tag of $4.3 million, an upgrade from Cummings’ more humble Studio City home that was worth $1.5 million in 2011.