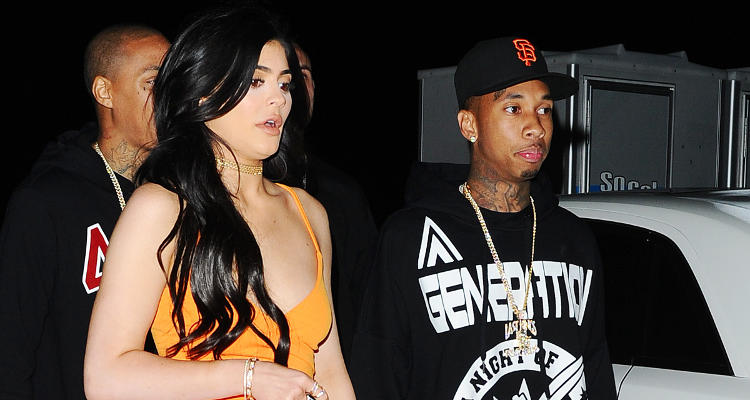 If you are asking yourself, “Where is Kylie Jenner right now?” you are not alone. The 18-year-old (who regularly makes headlines) was recently seen with her on-again off-again boyfriend, Tyga. That’s old news. The big news here is that she was wearing a flashy new ring and people took notice. The question on everybody’s mind now is: Is Kylie Jenner engaged? Ever since she was spotted wearing the ring, the rumor mill is working overtime with speculation that Kylie Jenner and Tyga have decided to tie the knot.

Kylie’s rocky relationship with Tyga has kept the people following her on their toes. Will she jump into holy matrimony with Tyga or not? Her new ring has popped up on celebrity web sites sending the paparazzi into a frenzy. The Kylie Jenner Snapchat features her flaunting the ring, which sparked the rumors about her relationship status. Kylie has also posted a picture on her Instagram of the ring on her finger  for all to see. The fact that Kylie and Tyga were seen cozying up to each other last week at Los Angeles International Airport has only added fuel to the fire. Why would Kylie give the caption “Mr. And Mrs.” if wedding bells were not around the corner? Sources say that Kylie has discussed marriage with Tyga, but the actual event is not likely to happen anytime soon.

Kylie is interested in strengthening her relationship with Tyga, but marriage is not on her mind as of right now. Her huge diamond ring sent her fans speculating about her intentions but wedding bells are not imminent. Kylie and Tyga have become closer to each other as is evident from their cuddling up at the airport. Her fans can take it easy right now because the news is that she is definitely not getting married as of yet. A classic case of much ado about a big ring!