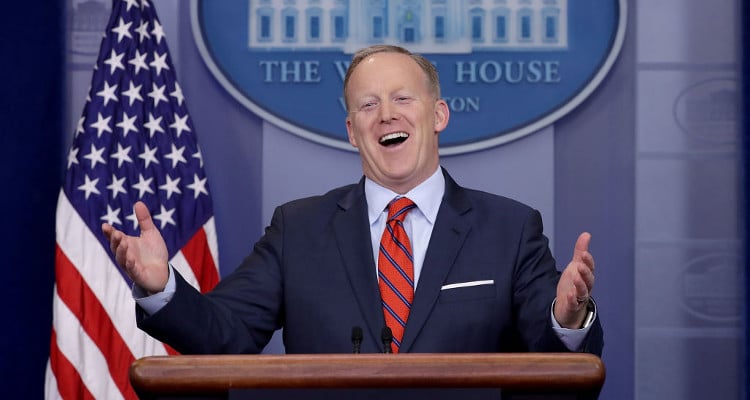 White House Press Secretary, Sean Spicer appeared to have a memory blank during the press briefing on Tuesday (April 11). He seemingly forgot about a very important moment in history, the Holocaust —during Jewish Passover, no less!

Last week, the Trump administration ordered airstrikes on Bashar al-Assad-controlled air bases in Syria to mixed reactions. But there was a chorus of shock when Sean Spicer did the unthinkable. In a press briefing yesterday (April 11), Spicer compared Assad to Hitler…in a somewhat unfavorable light. Many want to know what is wrong with Sean Spicer for thinking his comments were appropriate. What did Sean Spicer say today? Here’s the lowdown.

Did Sean Spicer Forget About the Holocaust?

Sean Spicer stepped up to the podium in what would become one of the most dreadful televised briefings from the White House to date. This press address came during the time that Jews around the world celebrate Passover. When asked about Russia’s ties to the Assad government in light of the airstrikes, Spicer said, “You had someone as despicable as Hitler who didn’t even sink to using chemical weapons. So you have to, if you are Russia, ask yourself is this a country that you and a regime that you want to align yourself with.” The comment was not well received.

In all fairness, Spicer was sending a message to the countries allied with Bashar al-Assad, the reigning president of Syria. But it appears Spicer’s history lesson was missing a hole as big as the Holocaust.

Spicer conveniently forgot that Hitler did, in fact, use chemical weapons! Hitler was at the helm of a massive genocide campaign, which used gas chambers to kill millions of Jewish people, homosexuals, prisoners of war, disabled people and other targets of the Nazis during the second World War.

Reporters present at the briefing asked Spicer to clarify his comments, which only made things even more awkward. This seems to be the exact moment during the speech that Spicer remembered about gas chambers being used in WWII, and disastrously blundered, “I think when you come to sarin gas, he was not using the gas on his own people the same way that Assad is doing,” he said. The “own people” phrasing struck a sore nerve for anyone who heard it.

As the questions mounted, so did Spicer’s awkward stuttering and gesticulating. “Thank you, I appreciate that. There was not in the – he brought them into the Holocaust centres – I understand that. But I’m saying in the way that Assad used them, where he went into towns, dropped them down into the middle of towns.”

He further tried to quell the storm by issuing a written apology.”In no way was I trying to lessen the horrendous nature of the Holocaust. I was trying to draw a distinction of the tactic of using airplanes to drop chemical weapons on population centers. Any attack on innocent people is reprehensible and inexcusable.”

Spicer also went on to justify his views on CNN with Wolf Blitzer. “I was obviously trying to make a point about the heinous acts that Assad had made against his own people last week, using chemical weapons and gas. Frankly, I mistakenly made an inappropriate and insensitive reference to the Holocaust, for which there is no comparison. And for that I apologize. It was a mistake to do that.”

The Internet Reacts to the Sean Spicer Gaffe

Not only did Spicer make a Holocaust gaffe, but he also forgot Godwin’s Law —the Internet adage that bringing up Hitler or Nazis will mark the end of any discussion. In politics, never compare anything to Hitler, especially in a favorable way. If you do, you will be the subject of memes.

Spicer’s comments made reporters in the room go “WTF.” The journalists’ priceless reactions to his foot-in-mouth moment has sparked a meme trend online, and the Internet isn’t going easy on him. Sean Spicer is certainly giving United Airlines and Pepsi a run for their money in the memes department!

when the check arrives and someone at the table asks for a pen pic.twitter.com/F7PEOtVR0l