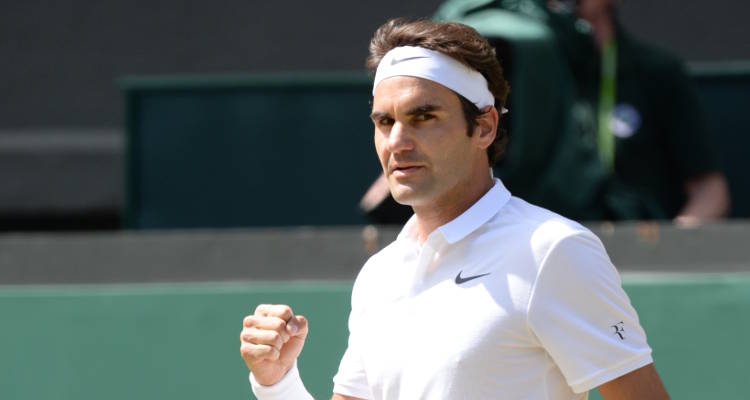 Swiss tennis pro Roger Federer is a household name thanks to his superior skills on the tennis court. The 17-time Grand Slam singles titles winner is currently ranked at world number three and is widely regarded as the greatest tennis player of all time. He is the first men’s singles player to reach 10 consecutive Grand Slam tournament finals and a total of 27 Grand Slam finals. Not for nothing is he fondly called Maestro or Fed Express by his devoted fans. We’re sure some of you must have been asking, “How much is Roger Federer worth?” Well, Forbes magazine ranked him at number four on its list of the world’s highest-paid athletes after ace footballers Cristiano Ronaldo and Lionel Messi as well as legendary basketball player LeBron James. Naturally, he is the highest paid tennis player of all time. So, what is Roger Federer’s net worth?

As of 2016, Federer’s net worth is a staggering $67.8 million. He has been playing professional tennis since 1998 and has consistently ranked in the top eight for the last decade, and he was ranked world number one from 2004 to 2008. The 34-year-old rakes in a cool $7.8 million in winnings and salary. His endorsement portfolio boasts luxury brands like Rolex watches, Nike Sportswear, chocolatier Lindt, Mercedes-Benz, and Credit Suisse. Not surprisingly, his earnings from his endorsements add up to an unbelievable $60.0 million. His sponsors include Wilson Sporting Goods, Gillette razors, and multinational conglomerate Moët & Chandon. Money is no matter for the father of four.

Federer has garnered numerous awards and accolades for his prowess on the tennis court. He holds several records, such as reaching the Wimbledon final 10 times and is the only male player to win the U.S. Open title five times consecutively. The champion has also won the Olympic Gold medal in doubles (2008) and the Olympic Silver medal in singles (2012). In May 2016, Federer withdrew from the French Open citing an unspecified injury. His health has become a major concern after his recurring back problems flared up and had his first ever knee surgery in February this year. By withdrawing from the French Open, also known as Roland Garros, Federer put an end to his 65-match streak in Grand Slam tournaments.

Federer was born in Switzerland in 1981 to Robert Federer and Lynette Du Rand. He started playing tennis at the tender age of 8, and by 11, he was among one of the top three junior players in the country. At 14, he was the junior national champion, imitating his idol Boris Becker. The rest, as they say, is history.

Federer is considered a dutiful family man. He has been married to former tennis player Mirka Vavrinec since 2009. They wed in a private ceremony surrounded by close friends and relatives in his hometown near Basel, Switzerland. The same year, the two became proud parents to twin daughters Charlene Riva and Myla Rose. In 2014, the couple welcomed a second set of twins, this time boys, whom they named Lennart and Leo. The devoted father of four is frequently seen spending time with his wife and children off the court. The entire family is a regular spectator watching Federer establish his dominance on the court. The Federer family resides in Bottmingen, Switzerland. Two years ago, they moved into a $8.0 million glass house called “The Residence,” which overlooks Lake Zurich.

Federer is well known for his philanthropic work off the tennis court. The Roger Federer Foundation was established in 2003 to provide education and sports access to unprivileged children. It also gives charity and grants to underdeveloped countries whose infant mortality rates are more than 15%. In 2004, he pledged support to the Swiss/South African charity IMBEWU, which promotes sports and health awareness. Federer’s mother, Lynette Du Rand is South African and was raised there, so Federer has close relations to the country. The next year, he auctioned his U.S. Open tennis racquet to help Hurricane Katrina victims and even visited South Africa the same year to meet some of the children helped by his charity.

An exhibition called Rally for Relief was organized by him at the Pacific Life Open, and the proceeds from it went to tsunami victims of the 2004 Indian Ocean earthquake. Plus, Federer even visited Tamil Nadu in 2006. UNICEF also appointed him their Goodwill Ambassador to increase AIDS awareness. After the Haiti earthquake in 2010, Federer scrambled to host a special charity event called “Hit for Haiti” at the Australian Open. At the 2010 Indian Wells Masters exhibition, Federer raised $1.0 million and the Federer vs. Nadal “Match for Africa” in 2010 held in Zurich and Madrid raised more than $4.0 million for both their respective foundations. Again in 2014, the “Match for Africa 2” Wawrinka vs. Federer in Zurich raised over $1.0 million for education initiatives in South Africa.

Roger Federer is well-rounder indeed, juggling his numerous trophies, his four children, as well as his charitable work. We wish him a speedy recovery and hope to see him back on the court soon giving the younger brood a run for their money!!