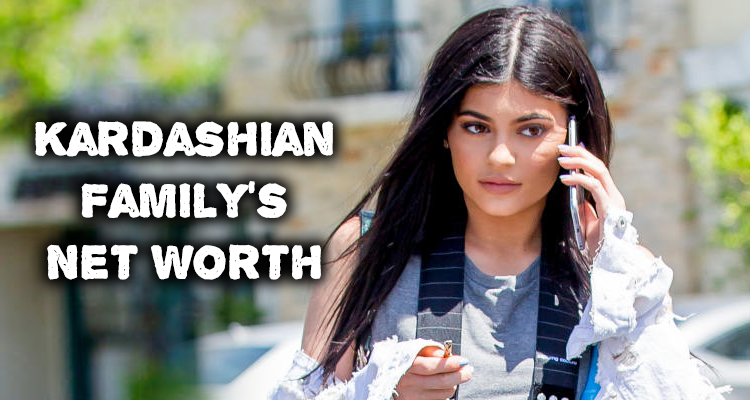 The Kardashian-Jenner clan is America’s first family of show business who quickly became famous for … well, being famous. All the members of the family have raked in plenty of moolah over the last decade, starting from Kim Kardashian’s infamous sex tape leak in 2007 that cemented their rise to stardom and “momager” Kris Jenner’s carefully planned strategies. The ever-expanding Kardashian family net worth is unsurprisingly beyond anyone’s wildest dreams. The entrepreneurial siblings have amassed an enormous fortune thanks to their TV show, Keeping Up With the Kardashians (now in its 12th season), clothing lines, perfumes, tanning products, gaming apps, novels, video games, and many, many more ventures. It’s natural to ask, “How much is the Kardashian family worth?” or “What is the Kardashian family net worth?” and even “How rich are the Kardashians?”

Brace yourself: the Kardashian family net worth is $300.0 million … and increasing by the minute!

The mastermind behind the Kardashian’s success, their queen mother, Kris, charges management fees and commission on the family’s earnings. She’s even applied for the word “momager” to be patented. The matriarch has her own talk show and has launched many cookbooks. Her combined net worth, including her house, cars, and salary, is around $40.0 million!

The entrepreneur, model, and socialite boosted her brand name and image with her high-profile marriage to rapper Kanye West. The gorgeous mother of two children—three-year-old North and seven-month-old Saint—is worth $53.0 million. Her famous husband, on the other hand, is worth a staggering $145.0 million!

Thanks to their cosmetic product lines, clothing collections, fitness endorsements and spin-off TV shows, these two Kardashian sisters are worth $38.0 million combined. They may not be as high-profile as Kim, but they’re not doing so bad for themselves either.

The 66-year-old Jenner was once athlete who earned a gold medal at the Olympics. Regularly in the news thanks to her well-documented transition from male to female and her divorce from ex-wife Kris, Caitlyn is worth $84.0 million and has her own TV show called I Am Cait.

The 20-year-old supermodel has become a well-known name on the fashion circuit and has walked the runways at the Paris, New York, and Milan fashion weeks. She is the ambassador of cosmetics giant Estée Lauder. The Victoria’s Secret Angel has modeled for brands like Marc Jacobs, Chanel, Fendi, Calvin Klein, Givenchy, and Balmain. Her net worth is estimated at $12.0 million, and considering her young age, she’s just getting started!

The youngest member of the Kardashian-Jenner clan isn’t far behind and seems to have picked up a thing or two from her famous older siblings. The entrepreneur has earned her endorsements and hair extensions line. This year she launched her cosmetics line called Kylie Cosmetics after the wildly successful lipstick and liner duo Kylie Lip Kit. The 18-year-old shot to fame overtaking her siblings in Instagram followers and is a hit with the younger brood of Kardashian obsessed fans. She has amassed a respectable net worth of $5.0 million, but watch out for this one.

The 32-year-old son of Caitlyn Jenner and actress Linda Thompson, Brody was already a reality TV regular and appeared in the shows Princess of Malibu and The Hills, on which he dated Lauren Conrad. He executive produces his show Bromance and has some endorsements in his kitty as well. Brody’s net worth is a modest $10.0 million.

Known as the introvert of the extensive family, 29-year-old Rob has recently been in the news for his secret engagement to now-pregnant former dancers, Blac Chyna. He owns a sock company called Arthur George, but his primary source of revenue is KUWTK and its spin-off shows.

To make things easier for devoted fans, we’ve made a list of all the members of the Kardashian-Jenner clan and their net worths! In a nutshell, you can see exactly how much money the Kardashians have, counting their houses, cars, salaries, and TV shows.