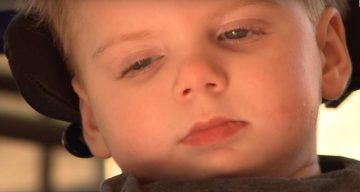 Following a freak accident at the age of two that left him brain damaged, Bill and Stacy Halstead took care of their baby boy, Tripp Halstead, with total devotion and love. He fought bravely for almost five years before he died on March 15, 2018. His parents are suffering from an immeasurable loss. Who was Tripp Halstead? What happened to him? Keep reading to find out.

It is the news that nobody ever wanted to hear, especially after following this heart-wrenching story for the last few years. Tripp Halstead was a brave boy, who has been fighting for his life since October 29, 2012, when a tree branch fell on his head and gravely injured him while he was at daycare. It was confirmed yesterrday that Tripp Halstead, who was known as the “miracle baby,” has passed.

We have all the information here with details from Tripp Halstead’s wiki.

Who Was Tripp Halstead?

Tripp Halstead was a seven-year-old boy who lived with his parents, Stacy and Bill Halstead in the town of Jefferson, about 60 miles from Atlanta, Georgia.

The little boy had survived a traumatic brain injury in 2012 when a tree branch fell directly on him. The freak accident occurred while he was at daycare, at the age of just two years old. He had been in and out of hospitals ever since.

How Did Tripp Halstead Die?

On Thursday morning, Tripp Halstead’s mother Stacy went to wake him up for school when she noticed that his breathing was labored.

She took to social media to inform all friends, family, and supporters who’d been following Tripp’s story of what happened; “I could see his little chest going up and down and his heart rate was high. We already had oxygen on because it helps him sleep better at night, so no alarms had gone off.”

When Halstead tried to move her son, he whined and she said he “had crazy diarrhea.” Halstead then called his pediatrician, who told her to bring him in.

As Halstead was driving, she could see that her son’s condition was getting worse, and she wasn’t sure that there was enough oxygen in the tank she brought to make it to Atlanta.

So, Halstead took a detour to Athens, Georgia, and once she reached the hospital, the doctors did blood work on Tripp, put him through some X-rays, and gave him an IV. They said that his oxygen levels were low while his carbon dioxide levels were high.

They also said that his left lung was cloudy due to possible pneumonia or a mucus plug. But since they didn’t have a pediatrician in the ICU, they sent her and Tripp to CHOA (Children’s Healthcare of Atlanta).

Bill and Stacy Halstead were both in the hospital room when their son passed away at around 5:47 p.m. on March 15.

Tripp Halstead’s body could not fight the infection. His little heart gave out, leaving his parents devastated and his well-wishers in tears.

There are no words to express how Bill and I are feeling at this moment. We are beyond devastated and honestly I believe…

Also Read: Stephen Hawking’s Children: Leaving a Legacy behind for His Kids

What Happened to Tripp Halstead to Cause His Injury?

On October 29, 2012, Tripp Halstead was playing in his daycare center called Cribs to Crayons, when a gust of wind from Hurricane Sandy caused a tree limb to fall directly onto the young boy.

He was knocked unconscious and was immediately taken to the hospital, where his condition remained unstable. According to reports, Tripp remained in a coma for weeks. It wasn’t until nearly 10 months after the accident that Tripp was finally brought home from the hospital.

Tripp Halstead’s brain was swollen on both sides, and he had to undergo several life-saving surgeries in rapid succession. He survived, and his parents called it a miracle. But he continued to have serious problems all stemming from the injury to his brain.

Tripp Halstead’s story caught national attention, and a family friend set up a Facebook page for his parents. They kept posting updates about their son’s condition and asked people to pray and donate money for his recovery.

The Halsteads received support from thousands of well-wishers, most of them strangers, who had heard about their son’s condition from media reports.

However, despite everybody’s prayers, support, and the hard work of doctors and his parents, Tripp Halstead passed away. Please keep The Halsteads in your prayers today.