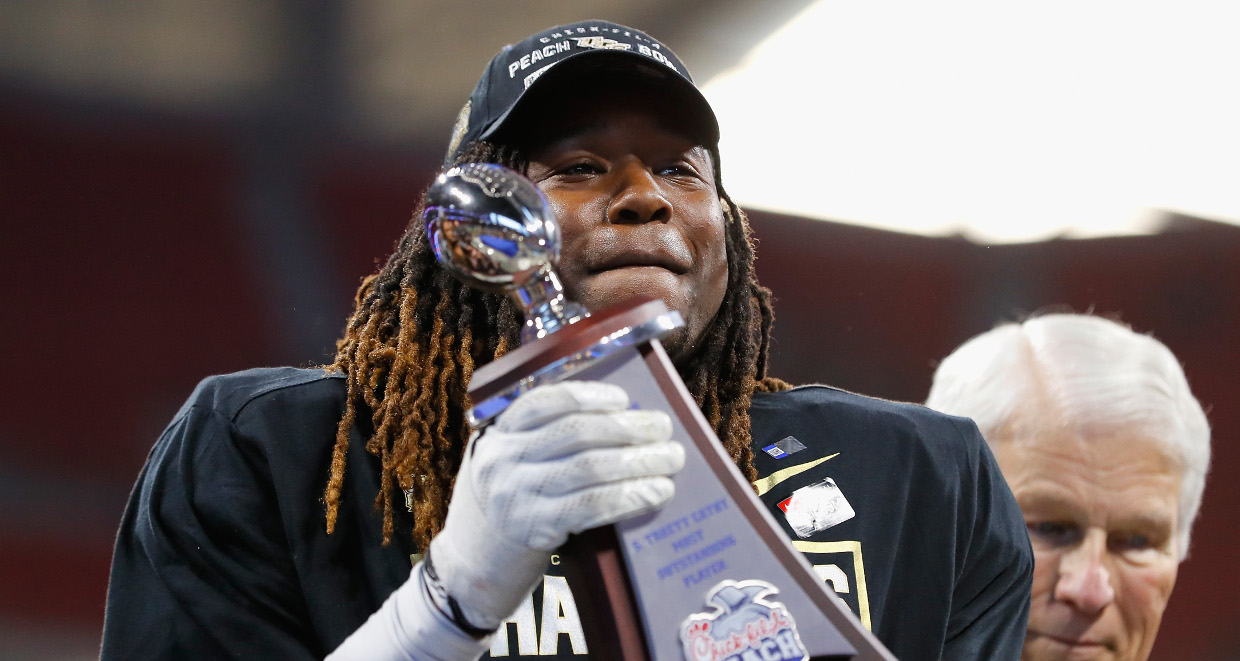 On Sunday, America took notice of the football sensation that is Shaquem Griffin. The UCF Knights linebacker gave it his all to finish the 40-yard dash in record time. He also completed an incredible 20 reps in the bench press on Saturday—and he did this with a prosthetic left hand! Many fans want to know what happened to Shaquem Griffin’s left hand after learning it is missing. How did Shaquem Griffin lose his hand? Keep reading to know more.

Shaquem Griffin was one of the stars at last weekend’s NFL scouting combine. He finished the 40-yard sprint in 4.38—a record for the fastest time by a linebacker ever.

Fans who have been following Griffin’s football career may have noticed that the star’s left hand is missing. But that certainly hasn’t stopped him from delivering one incredible performance after the other!

We have everything you need to know about Shaquem Griffin’s story, including how he lost his hand as a child.

Shaquem Griffin, who is 22 years old, was born in St. Petersburg, Florida. He has a twin brother, Shaquill Griffin, who plays football for the Seattle Seahawks.

Both brothers received scholarships and played football at the University of Central Florida Knights before Shaquill Griffin was drafted into the NFL in 2017.

In his four years at UCF, Shaquem Griffin totaled 17 sacks and 30 tackles for a loss with his eyes firmly fixed on joining the NFL.

Griffin was crowned the 2018 Peach Bowl Defensive MVP, and was named as the American Athletic Conference Defensive Player of the Year in 2016.

How Did Shaquem Griffin Lose His Hand?

Amniotic band syndrome is a congenital disorder that can cause limbs or fingers to be trapped in fibrous amniotic bands while in the womb. The condition affects about one in 1,200 births.

Struggling with severe pain in the fingers on his left hand, Griffin attempted self-amputation with a butcher’s knife as a four-year-old. Thankfully, his mother found him in time and scheduled an appointment for doctors to amputate his left hand.

Even after the amputation, Griffin continued to take part in outdoor sports, including track, basketball, and football, along with his twin brother.

Shining Bright at the NFL Combine

Shaquem Griffin’s left-hand loss hasn’t deterred him from rising to great heights, as he certainly showed the world on Sunday.

Griffin proved his mettle in games with UCF, forcing fumbles with just one hand. He initially didn’t receive an invitation for the NFL combine but proved to everyone that he belonged there.

On Saturday, prosthetics attached to Shaquem Griffin’s left arm helped him push hard to complete 20 reps of 225 pounds in the bench press.

Griffin continued his stunning performance on Sunday’s 40-yard sprint by finishing with a record-breaking 4.38 seconds. The last time a linebacker ran at a similar speed was 4.40 back in 2006.

Twitter was buzzing with news of Griffin’s fantastic performance. His achievements drew praise from NFL stars, including his twin brother, J.J. Watt, and Von Miller.

On their Twitter page, the NFL shared an inspiring quote by Griffin that read, “Kids, grown men, grown women can see me and know that whatever they want in life they can accomplish as long as they put their mind to it.”

The UFC linebacker definitely did all that and more! We can’t wait to see how Shaquem Griffin’s NFL journey begins as he sets his sights to become the best against all the odds.