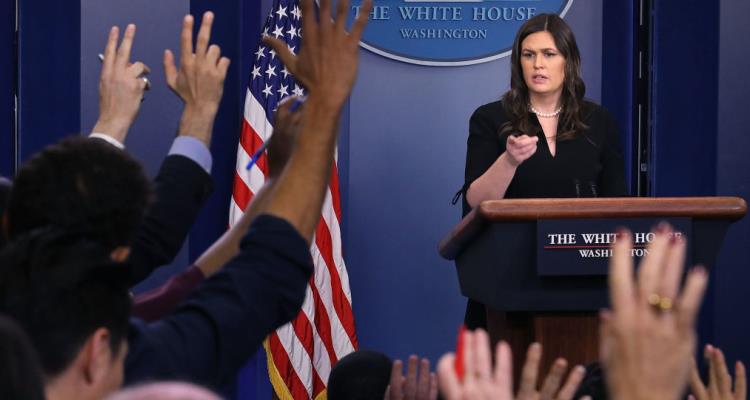 Is Sarah Huckabee Sanders leaving the White House? After the Stormy Daniels interview on 60 Minutes, viewers and White House reporters were hoping to have that question addressed. Did something happen to the White House press secretary? Read on to find out!

Get the full scoop, right here!

Is Sarah Huckabee Sanders Being Replaced?

It wasn’t just the White House press that noticed that the 35-year-old press secretary had been absent, but also viewers at home. She was replaced by her deputy press secretary, Raj Shah, who was filling in the press on the Stormy Daniels scandal. But isn’t that Sanders’ job?

Normally, it’s Sanders’ job to fill in the blanks and address the people on behalf of the President. But that wasn’t the case this time.

On March 26, 2018, the press secretary was missing from her post, which left Shah to fill in her shoes. Shah answered questions about Trump’s alleged affair with Stormy Daniels (Stephanie Clifford) after her recent TV interview.

“With respect to the interview, I will say the president strongly, clearly and has consistently denied these underlying claims and the only person who has been inconsistent is the one making the claims,” Shah said to press on Monday.

Members of the press also asked if the $130,000 Trump gave to Clifford was “hush money.” But Shah deflected the question. This only added more fuel to the fire, which later spread on social media.

But according to CNN, the president is “not happy” with Sanders at the moment. Why?

It’s apparently because of her responses regarding the whole Stormy Daniels debacle. Remember, Daniels is currently suing the president and claims that she never signed a non-disclosure agreement, which would have prevented her from discussing the alleged affair.

But Sanders told reporters that the arbitration was “won in the president’s favor,” basically admitting that the non-disclosure agreement did exist and that it directly involved the president!

According to CNN, it was the first time the White House admitted that the president was involved in any way with Daniels.

Where Is Sarah Huckabee Sanders Today?

According to Blasting News, Sarah Huckabee Sanders was off yesterday, and she’s still active on her Twitter feed. But is she on her way to being fired?

Job security isn’t a common thing at the White House these days, and many are wondering if the press secretary will be fired. So, is she on her way out?

We have gotten used to seeing Sanders’ pearls and calm demeanor on TV. And surprisingly, she’s the only employee that you can expect to see the next day.

It’s possible that she really did have a day off (coincidentally, during one of the most recent scandals). However, some believe it’s more than that.

Trump has cleaned house quite a bit since his inauguration. And it’s been the perfect material for late night comedians.

Both Democrats and Republicans aren’t on board with many of the president’s actions, and his constant Twitter wars don’t help his image.

Sarah Huckabee Sanders may not be liked by everyone for her brand of  “spin,” but Donald Trump seems to be pleased with her job performance (at least, so far). Just don’t be surprised if she suddenly “resigns” out of the blue and starts a tell-all book tour!