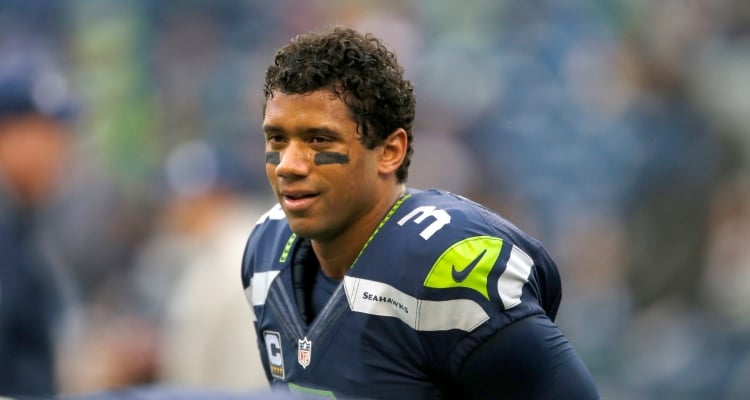 Russell Wilson is an American football quarterback for the Seattle Seahawks in the National Football League [NFL]. Right now, he is in bad shape after having suffered a serious injury, while playing in a game on September 25, 2016. Russell was playing against the 49ers in the Seahawks’ Week 3 match up, when he was tackled very roughly by Eli Harold of the 49ers. Check out the Russell Wilson injury video below. People are now curious as to exactly what happened to Russell Wilson. Don’t worry, we will tell you all about it right here.

In the third quarter, when Wilson was tackled, his knee appeared to be bent in an unnatural way. Following Russell Wilson’s knee injury, he exited the game for a play before returning. However, the knee was still giving him trouble so Wilson went back to the sidelines to get it looked at. Wilson then put a knee brace on his left knee. Despite that, Wilson had to sit out for the rest of the game. The Seahawks were ahead anyway, and they decided to preserve their star quarterback. You can see the actual play when Wilson got injured by clicking below.

Wilson has been one of the star players of the Seattle Seahawks team. He was born in Cincinnati, Ohio and grew up in Richmond, Virginia. His father was a lawyer while his mother was a legal nurse consultant. Wilson took to football early on, when he was just four years old and started playing with his father and brother. Wilson went to college where he had an outstanding career in college football. After some initial hiccups, Wilson was selected for the Seattle Seahawks in 2012. There were some voices of dissent at his selection, but they were effectively silenced when he won the Pepsi NFL Rookie of the Week honors for his excellent play. Since then, Wilson has stayed with the Seahawks and is currently in his fifth season with the team.

Russell Wilson’s MRI has been completed and the diagnosis looks good. The knee injury is not as serious as it looked when he initially got it. Wilson is very grateful to God and has tweeted the same. The small sized quarterback is getting the best medical attention and looks likely to return to his team soon. The David of the Seattle Seahawks continues to survive against the Goliaths of the opposing teams.