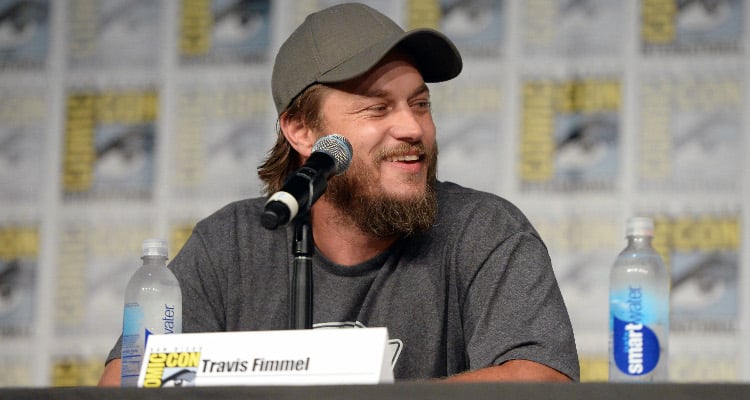 History Channel’s helping us tide over the wait for Game of Thrones with season 5 of Vikings. But we’re missing somebody. What happened to Ragnar Lothbrok on Vikings? Read on to find out!

Vikings season 5 premiered with a civil war going on between Ragnar Lothbrok’s sons. But where is Ragnar? Travis Fimmel’s ruthlessly noble character got us hooked onto the fantastical period drama. We can’t imagine Vikings without Ragnar or his brother, Rollo. Will Ragnar be in Vikings season 5? Here’s what you need to know from Travis Fimmel himself.

In season 4, Ragnar is building up to his swan song. He attacks Paris to kill his brother, Rollo for defecting to Normandy, but fails. After his defeat, he disappears for a decade only to return to Kattegat an unwelcome man.

He challenges his sons to put him out of his misery and take over his kingship before he goes about saying his goodbyes to everyone. He then persuades Ecbert to hand him over to King Aelle to be executed.

Aelle tortures him until the day of execution comes. In the end, Ragnar boasts of Odin and meting his sons in Valhalla to talk about their conquests before he’s thrown into a pit of venomous snakes. Ragnar’s death is the same way Ragnar in the real-life Norse legend died.

Though his death was long coming, fans are in denial. Fan theories that Ragnar actually survived the snake pit or faked his death like he did before are doing the rounds on the Internet. Fans can’t help but hold a candle for Ragnar’s return in season 5.

Season 5 began with his sons turning on each other while wanting to avenge their father. But no sign of Ragnar. Travis Fimmel added fuel to the speculation fire when he proclaimed “Season 5 is my favorite.” Why would it be your favorite unless you’re in it, Mr. Fimmel?

Ragnar Lothbrok is not dead. I will not be surprised if it suddenly comes out 🙂 pic.twitter.com/5wUkVOAhLr

But he came right out and doused all hopes that Ragnar is not returning. “Yeah, no, no. I’m not returning. It sort of doesn’t make sense. My character is an atheist, so I’m not going to be coming up in any ghost, religious ghostly images or anything. I think you have to be very religious for people to have that belief in you.”

Fimmel may have said his farewell to Vikings, but the show is not sending him off to Valhalla just yet. Show creator Michael Hirst contradicted the actor saying it’s not the end for Ragnar Lothbrok. Given the Norse king’s major presence in the show, he will be a lot more than just a passing mention.

“I never wanted this story to end when Ragnar dies physically,” said Hirst. “We’ve shot roughly 25 more hours of TV now after Ragnar’s death, and we are a long way down the line. We are really embracing the sons, but Ragnar hasn’t gone away, because Ragnar is still the inspiration,” he added. Make it happen, Hirst!

We won’t be hasty saying our farewells to Ragnar just yet. But do you know which marauder is making a grand comeback? Rollo!

The last time we saw Rollo, he was having (what Clive Standen who portrays him describes as) a “midlife crisis.” He left his Viking life behind to return to his wife and kid in Normandy. He was embracing his new life as the Duke of Normandy since he was out of Ragnar’s shadow.

But Clive Standen has assured us that Rollo will be returning to his Viking family. The only difference is he’ll be a changed man, which will create some tension between him and his old friends.

He will have a lot more presence this season since Ragnar is not there to steal his spotlight. We just don’t know when in season 5 Rollo will return! Either way, “It’s going to be explosive,” Standen promises, “but not in the ways that you’d expect.”