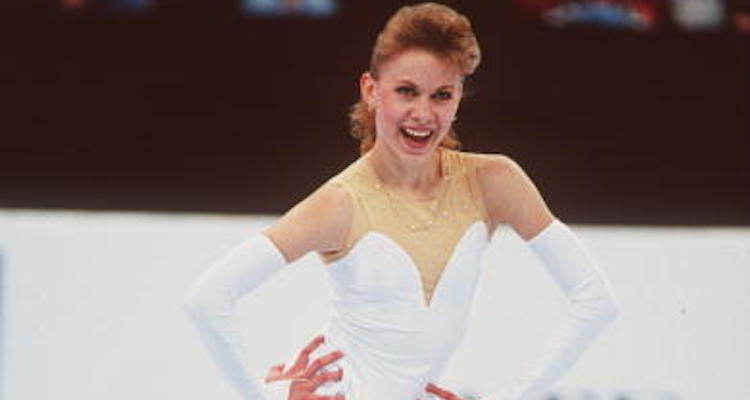 With the current Winter Olympics coming to an end, your thoughts may be turning to Olympic athletes of the past and what they might be up to now. Like Oksana Baiul. If you’re into figure skating, or of a certain age, you may remember her being the “Queen of the Ice” and winning gold. But where is Oksana Baiul now? We’ll take a look at her life and career and what happened to Oksana Baiul when she left the Olympic rink.

The Queen of the Ice

The landscape of figure skating for the 1994 Winter Olympics was a really interesting scene. A lot of focus was spent on the Americans, Nancy Kerrigan and Tonya Harding. Kerrigan was attacked just before Olympic try-outs and it was thought that if she couldn’t pull out a gold medal, Harding may be able to do it.

And then there was Ukranian figure skater, Oksana Baiul. While she was obviously talented (she won a silver medal at the European championships previously), she had a disastrous practice round.

During her practice skate at the Olympics, Baiul collided with German skater, Tanja Szewczenko. The collision wrenched Baiul’s back pretty badly and she got a small gash on her shin that required stitches.

But after some Olympic approved injections, Baiul not only had a fantastic skate but she ended up winning gold! Kerrigan ended up with the silver and Harding didn’t even place.

After the Olympics, Baiul headed home to Ukraine. Unlike her American counterparts, the situation that awaited her was not exactly the greatest. The Soviet Union broke up in 1991 and with that break-up, Ukraine had to figure out where to prioritize where its money was going. As it turned out, despite Baiul’s gold medal win, figure skating was not a high priority to the Ukraine government.

The training rinks were run down to the point that there was no ice resurfacer so coaches and skaters had to resurface the rink by hand. The country itself wasn’t doing a heck of a lot better. It was these conditions that lead 16-year-old Baiul to give up amateur skating to become a professional.

Baiul started her pro career with an American tour. While this was a great financial opportunity, Baiul has since stated that her issues with alcohol began during that tour.

Despite her young age, injuries began to take their toll. She also experienced changes to her body that necessitated a change in her skating style. Despite this, Baiul skates professionally to this day.

In terms of her personal life, the road has been bumpy but it seems like she’s made it through. In 1997, Baiul’s drinking issues began to become public after she crashed her car into a tree and was charged with a DUI. In 1998, with the encouragement of her husband, Baiul entered rehab. She’s been sober ever since.

Baiul spent a large amount of time in court. According to her and her lawyers, a number of different entities have either never paid her for various shows and events or have actively stolen money from her. She sued multiple places in order to try and recover some funds that she sees as hers.

Oksana Baiul is still active in 2018. As of her last press releases, she is apparently going to star in a film about Sonja Henie, a figure skater who became an actress. Along with that, Baiul is apparently working on a show for a new casino resort in Las Vegas.

Oksana Baiul is married to her manager, Carlo Farina. The couple currently live in Las Vegas.