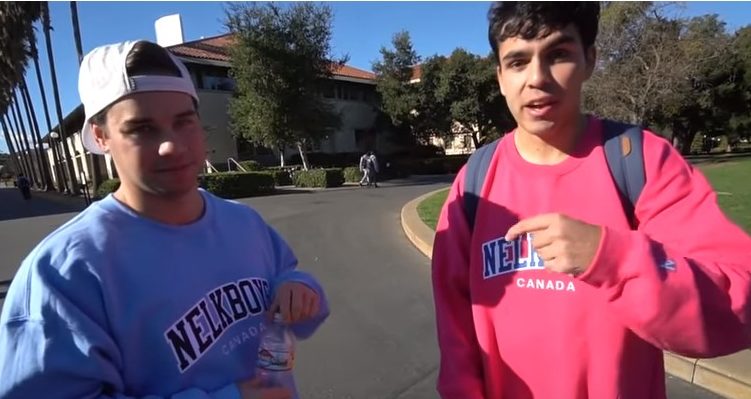 The YouTube pranksters known as NELK are always up to something, and it usually ends up in chaos. But they’ve been noticeably missing for some time. Now, fans of the Canadian pranksters are wondering what happened to them. So, where is NELK now? Is NELK banned? Get the full scoop here!

Love them or hate them, this dynamic duo have been making people laugh, squirm, scream, and scold for years now, quickly gaining the biggest popularity in their home country of Canada. In fact, it’s quite possible they’ve been banned from every Cineplex Odeon in Ontario! Many people would love for pranksters, Kyle Forgeard and Jesse Sebastian to be locked up forever and now that they’ve been MIA, some are even wondering if that’s the case! So, is NELK in jail?

Well, this time around, that’s not the case. So, keep reading to find out what happened to NELK.

Broadband TV terminated their contract because of their Google videos. On top of that, YouTube removed the video from NELK’s account and issued a “community strike.” What does all this mean?

Well, it means that NELK was banned from uploading content, once again. And this time, it was for two weeks!

According to the post, if they receive one more strike within three months time, they will be terminated altogether!

The Video Responsible for the Ban

So, what was the video responsible for the latest ban?

The Toronto natives uploaded the video, Pretending to Work at the Google Headquarters!, and it was flagged.

The video violated YouTube’s guidelines and so they removed it and have blocked the pranksters from uploading any new content. (At least for their two-week ban.) However, it looks like the video is still posted and is available to watch (at least for now)! Check it out below—and don’t get any crazy ideas!


Where Is NELK Today?

Today, the prankster princes are still uploading content on other forms of social media. However, they haven’t uploaded much content on YouTube lately. (Seems like they’re getting pretty fed up with the strict guidelines they must adhere to, and when they don’t, they get flagged and we go through this song and dance again.)

Fans have expressed an interest in the content creators starting their own website. But at this time, it seems NELK just keeps pressing YouTube’s buttons, clapping back via Twitter regarding the ban. Clearly, they just don’t give a hoot. Their plan? To release their next video, which they are already promising is going to be “savage as f***.” (What’s that they say? Don’t poke the bear…)

It doesn’t stop after the two week ban either.. Our next video is savage as fuck and could easily earn us a strike and getting our channel terminated. This is a problem with @YouTube in general.. pic.twitter.com/hqjnciKORj

Pranks Can Cause Panic

In 2016, NELK’s members filmed themselves telling Los Angeles Police Department officers that they had a “bunch of coke,” according to The New York Times. However, that kind of behavior to unknowing parties could end up in danger or unwanted panic. Many disagreed with the prank.

YouTube is owned by Google and released a statement following the incident, which read, “Prank videos have been part of the online video culture from the very beginning. While many prank comedians on YouTube have grown fan bases around the world through original and fun content, we also have strict policies that prohibit misconduct on YouTube. We enforce these policies with our community on YouTube but we have limited visibility or control over the actions people take when off our platform.”

It’s unclear if NELK has learned their lesson, but there’s a good chance that they will be back to their old ways! It’s only a matter of time before they face the possibility of being banned again. Check back in two weeks when the ban is lifted. (Until then, check out the video below of the boys sneaking a bong over the Canadian/U.S. border to see what we mean! (We’re most shocked they got away with it!)