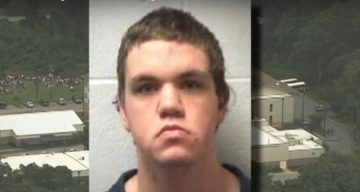 The Lifetime movie, Faith Under Fire: The Antoinette Tuff Story, was a reminder of the attempted Georgia school shooting. Michael Brandon Hill entered the school with a loaded rifle and, though nobody was hurt in the process, exchanged fire with police. After watching the movie, people want to know what happened to the real Michael Brandon Hill.

Micheal Brandon Hill, portrayed by Trevor Morgan in Faith Under Fire, was 20 years old when he entered a middle school full of children with a loaded weapon. He put more than 800 students in danger that day. If it were not for a brave woman named Antoinette Tuff, that day would have ended in tragedy. Tuff worked at the school’s front office, and was the one who made Hill put his weapon down and surrender. Find out where Michael Hill is today.

Thanks to the staff’s training in handling situations like this one, the children were safe from harm. As Hill went into the front office with a weapon, Tuff talked him down, while signaling her colleagues to warn the teachers and children.

She talked him down by telling him about her personal life, narrating her struggles about considering suicide after her divorce. When he was calm, he wanted her to call 911 saying, “Call the probation office in DeKalb County and let them know what’s going on.” On the call, she told the dispatcher that, “He said he should have just went to the mental hospital instead of doing this, because he’s not on his medication.”

Still on the phone with 911, Tuff was heard telling Hill, “We’re not gonna hate you, baby. It’s a good thing that you’re giving up.”

Though he surrendered, Hill briefly exchanged gunfire with police, but nobody was harmed.

Upon leaving the building, a visibly relieved Tuff revealed that she believed “that if he got out that door he was going to kill everybody.”

Meet Antoinette Tuff, the Woman Who Stopped the Atlanta School Shooter School bookkeeper Antoinette Tuff is being hailed as a hero after she averted what could have been a catastrophic elementary school shooting in an Atlanta suburb. On Tuesday, Michael Brandon Hill, 20, slipped past school security at the Ronald E. McNair Discovery Learning Academy, a school for pre-kindergarteners to fifth graders. He was armed with an assault rifle and other weapons. The outcome could have been tragic, but thanks to Antoinette Tuff’s quick thinking, Hill never got past the front office. Even as Hill held her and an officemate hostage, she said she spoke to him calmly and ultimately convinced him to lay down his weapons. “He had a look on him that he was willing to kill,” she said in an interview with ABC’s World News with Diane Sawyer. “He said that he didn’t have any reason to live and that he knew he was going to die today…I knew that if he got out that door he was gonna kill everybody.” …..to read the rest and listen to the 911 tape log on to BallerAlert.com (forum section) (clickable link on profile) #AntoinetteTuff #MichaelBrandonHill #atlanta #school

Where Is Michael Brandon Hill Now?

When he was captured, Hill told authorities he was sorry and that he was off his medication.

He was charged with terroristic threats, aggravated assault on a police officer, and possession of a firearm by a convicted felon, following an arrest earlier that year for attempting to kill his brother.

Hill’s brother, Timothy Hill later told officials that Micheal was bipolar and had a “long history of medical disorders,” and could “do something stupid.”

The gunman reportedly tried to kill himself nine times in the past, and was prescribed psychiatric medication.

After Micheal Brandon Hill’s attempted school shooting, he was sentenced to 20 years in prison. He pleaded guilty to 13 counts, which included, burglary, aggravated assault, illegal possession of a firearm, carrying a gun in a school zone, and making terroristic threats.