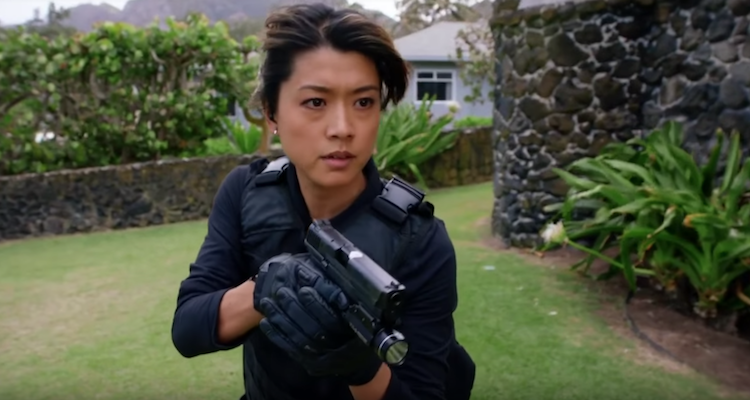 The latest season of Hawaii Five-O has gone into full swing! The action is back as are the beautiful locations, but some viewers may have noticed that Kono Kalakaua has disappeared. What happened to Kono on Hawaii Five-O? Did Grace Park leave the show? We did a bit of digging for you and we have all the answers on Grace Park, Hawaii Five-O, and what she’s up to.

When We Last Left Kono…

At the end of the last season of Hawaii Five-O, Kono headed towards the mainland, Carson City, Nevada to be exact, to join a multi-agency task force. The task force was going to go after sex traffickers. This kind of made sense, as Kono had been through a lot over the years and getting away from Hawaii would be good for her.

But Behind the Scenes…

So, why hasn’t Kono returned? Why did Grace Park quit? The answer to that really depends on who you ask. During season 7, a number of the cast underwent contract negotiations. While much of the cast ended up staying, Park and fellow actor Daniel Dae Kim chose not to come back to the show for season 8. At this point, we hit a little bit of a disagreement as to what the actual reason for Kim and Grace not resigning was. According to the network, both Kim and Park were offered large and significant salary increases to return. But, according to a rumor, Park and Kim were seeking equal pay as their co-stars and the network balked at going quite that far. Their co-stars also happen to be white. When that rumor came out, there was a fairly significant uproar over CBS’ lack of diversity (not only on screen but behind the scenes) as most of the network’s showrunners were white males and a large portion of their on-screen talent were also white. Whatever the reasons may be, these failed contract negotiations ended with Park and Kim leaving the show.

What’s Grace Park Up to Now?

Grace Park is incredibly talented as an actor, is very good with fight choreography, and if we had to be completely honest, she is incredibly beautiful. What is Grace Park doing now? Surely, she must have a new movie or television show in the works.

Her first post-Hawaii Five-O gig was guest starring on an episode of the recent reboot of MacGyver. Interestingly, being in a reboot of a popular franchise is pretty standard for Park. Beyond Hawaii Five-O, she’s also appeared in episodes of other reboots like The Dead Zone, Stargate SG-1, and of course her featured role on Battlestar Galactica.

Beyond the episode of MacGyver, Park also filmed an indy comedy called Public Schooled. Recently premiering at the Toronto Film Festival, Public Schooled is about a would-be physicist who’s been homeschooled his entire life but decides to go to public school to chase after the girl of his dreams. Did we mention that the girl of his dreams only has one leg? This quirky comedy was filmed in Canada and features Park as a frustrated mom of another homeschooled kid. It also features Judy Greer (Ant-Man, Archer) as Claire and newcomer Daniel Doheny as Liam.

If we were to guess, Park is probably weighing her options while taking a small break. She appeared for seven seasons on Hawaii Five-O —that’s a long time for an actor to play the same character. That being said, we wouldn’t be surprised if she shows up on our screens sometime in the near future. So, keep your eyes peeled for Park!