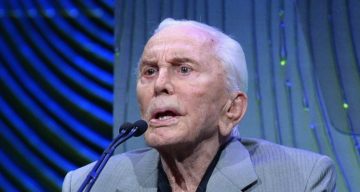 Update: Kirk Douglas passed away on February 5, 2020 of natural causes at his home in Beverly Hills. He was 103.

Kirk Douglas is a legend for many film fans. From 20,000 Leagues under the Sea to Paths of Glory and Spartacus, his classic films will live on long after Douglas is gone—and probably long after most of us are gone, too. But, many younger people may not know anything about the actor and may have been a little surprised to see Kirk Douglas at the Golden Globes 2018. After seeing the 101-year-old icon on stage at the awards show, many are wondering what happened to Kirk Douglas’s face. If you happen to be one of those people, then keep reading.

Born Issur Danielovitch on December 9, 1916, in Amsterdam, New York, Douglas was the son of Jewish immigrants from what is today known as Belarus. His family soon adopted the surname of Demsky, so Issur Danielovitch became Izzy Demsky.

He grew up poor and worked many odd jobs from a young age to help support the family. He fell in love with acting while performing in high school plays.

Using his natural charisma and talent, Douglas managed to attend St. Lawrence University and received a loan to pay for tuition. Those same skills got him an invitation to attend the American Academy of Dramatic Arts in New York City via a special scholarship. He officially changed his name to Kirk Douglas before entering the Navy in 1941.

Posted by Black and White Films Page on Saturday, December 9, 2017

When Douglas returned from World War II, he quickly became a working actor in radio dramas and theatre. From there, he was recommended by actress and friend Lauren Becall for a part in the 1946 film, The Strange Love of Martha Ivers.

After that, he appeared in at least one film every year until 1981. Many of these films are now regarded as all-time classic films. By the early 1990’s, Douglas’ career slowed down, but was still going strong for an actor of his age.

Michael Douglas went on to become a very successful actor in his own right, earning roles in films like Fatal Attraction, Wall Street, and most recently, Ant-Man.

Kirk Douglas married Anne Buydens in 1954. The couple added two more sons to the brood: Peter Douglas in 1955 and Eric Douglas in 1958.

Kirk Douglas and his wife

Posted by Cinemania on Thursday, December 7, 2017

Douglas and Buydens are still married to this day, which is a rarity in Hollywood.

Did Kirk Douglas Have a Stroke?

Unfortunately, on January 28, 1996, Douglas suffered a massive stroke that initially affected his ability to speak, along with his motor skills and mobility. Not willing to allow the stroke to take him down, Douglas began an intense regime of speech therapy.

While the actor’s language skills returned, the stroke did some damage. Kirk Douglas’ drooping face during the 2018 Golden Globes is not only the result of a stroke, but also because he is now 101 years old.

Not to be deterred, Douglas ended up acting in a few films after his stroke, including Diamonds and It Runs in the Family.

Michael and Kirk Douglas talking on the set of "Cast a Giant Shadow" in 1966.

He also wrote a book, My Stroke of Luck, which chronicled his first years of dealing with the issues that the stroke had brought. The book was also a guide for other families who have to deal with a loved one who has had a stroke.

The actor took up blogging and occasionally wrote for his website and The Huffington Post, up until last year.

Well, for someone who is over 100 years old, Kirk Douglas is a rather active guy!