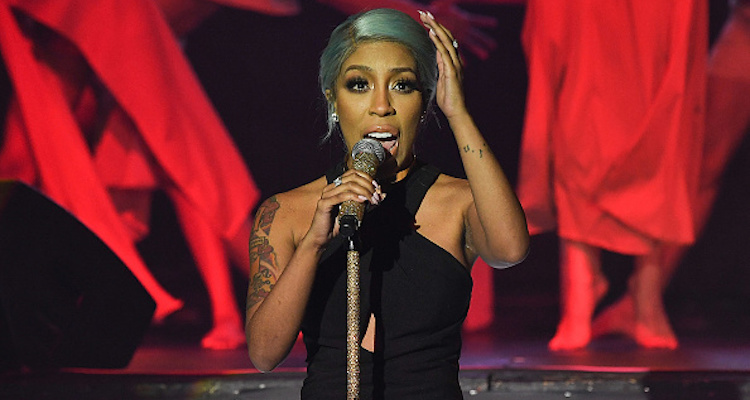 A once misguided and insecure K. Michelle decided to get butt implants a few years ago in order to look fuller and sexier. While she liked her new look at the time, she developed pain and other problems that made her decide to have the butt implants removed. She has just had her second surgery and is mighty relieved that she will look more like her true self again. But it’s been a battle, one that almost took her life! Read on for the full story!

People who have seen K. Michelle recently are wondering why she looks a bit different these days. Though she’s a known singer, most know her for her curvy figure and the fact that she had extensive surgery to enhance her butt. But no one, not even K. Michelle herself, could foresee the damage that procedure would have on her in the future. Yesterday, she took to social media to finally open up about her heartbreaking ordeal, and now, fans are wondering what happened to K. Michelle?

The American R&B singer, songwriter, and television personality shared an emotional Instagram live video, tearfully detailing the removal of her butt implants and the dire consequences they were having on her health. In fact, it got so bad, she could have died!

Insecurity Made Her Do It

Some four or five years ago, thousands of tiny pellets were injected into the singer’s butt, which after expanding like a sponge made Michelle’s butt look bigger and curvier. She got it done because she was insecure as a woman and felt the need to drastically alter her body. According to K. Michelle, “I was told, in this music industry, the men have to want to bang you and the women have to want to be you.”

She sat down with the ladies on The Real and explained what initially made her want to have the surgery. “For me, I’ve always been open. I’ve always been curvy, but it was never enough,” she said.

She added, “I thought, ‘I’m having trouble with men right now and maybe if I had a big ol’ huge butt, then I’d get bigger love.’ So that’s what I did. I did butt, I did hips.”

But she never expected the health complications the butt injections would have on her health.

The Pain Gave Her Second Thoughts

The singer thought that she looked good but changed her mind after the pain began. She said “I didn’t start to feel any pain or have any issues until like a year ago and my health just started to decline. It was like discoloration; it was pain in your back, it was migraines, it was super discomfort.”

I really can’t believe this has happened to me. I’m very serious about performing in a wheel chair by any means necessary. Maybe my friend 2chainz will loan me his. Ive been a little down not performing on the weekends that’s my therapy. Thank you @thequeenofkash for flying out for my surgery today. Thanks @beautybytayrivera for my flowers and @trinarockstarr @iamthequeenkarenking @ferraritru3 @iambridgetkelly @jefe @kingofhair @rocko2real @rkelly @krayzie_bone @shodsantiago @zenafoster all my Rebels I truly need you and love you. I promise you my heart is full of song. Really can’t wait to get back to “Rebellious Soul” K and empty out my heart. To the people who haven’t been there no worries I will never talk to you again, and to the ones calling who hurt me before this stop calling, I don’t wanna make up. This has really change my life. I gotta get this hate and hurt out my heart and i’m not ready to forgive. I’m just not. No one knows what it feels like to look in the mirror and not know your body anymore. University of Memphis I will see you even if I can’t walk. I need the energy.

In the end, Michelle decided that the pain she was suffering through simply wasn’t worth it! She said, “It’s like you always have this intuition when you know you might want to ignore it but I couldn’t ignore it anymore, and it just wasn’t worth it to me.”

So, she got the butt implants removed, and that’s the reason she is looking like the old K. Michelle again! She had her second surgery on April 16, 2018 and even though she is bedridden, she updated her fans via social media on her recovery. She is happy that they have been successfully removed, especially since finding a doctor to remove them wasn’t an easy task!

While discussing it with the ladies on The Real, K. Michelle opened up about finally finding the right doctor to perform the procedure, and she reflected on those who may not be able to have this surgery for reasons like costs. “People don’t talk about it. I’ve gone to doctors who don’t want to touch it. I’ve found one doctor who is going to do it for me. But imagine if you don’t have the money to get it out?”

Getting the implants out was no easy task, either. But not having them removed could have actually ended her life! In fact, the silicone that was injected into K. Michelle’s butt began to take a real toll on her health. “It’s to the point where the aching and the pain that made me get checked for lupus, now it’s due to my legs. My butt is so big that my legs are not holding it,” she said. She even had to have a blood transfusion it got so bad!

The doctors looked at K. Michelle’s butt through an MRI and they noticed thousands of little white dots, which were the pellets that were injected into her. They were to expand, making her butt bigger. These foreign objects in her system began taking a toll on her health, leading to migraines and other bodily complications.

But the tool the doctors used to attempt to remove the pellets kept getting blocked as it attempted to “suck them out” as the particles were clogging up the machine. Regardless, the doctors did what they could to remove them and drastically reduced the size of her butt, and now, K. Michelle is recovering.

Accusations of Bleaching Her Skin

People have also been pestering the singer for a while saying that she has been bleaching her skin! They are quick to point out Michelle’s skin lightening and are sure that she is bleaching it. However, Michelle says otherwise.

The singer insists that she is not bleaching her skin and has been slamming all rumors of her doing so. She took to Instagram to tell everybody the real reason behind her supposed skin lightening; it was “make-up,” but for a good reason.

Also Read:  Is Trixie from “Call the Midwife” Pregnant? Actress Helen George Will Take a Short Break from the Show

Michelle claims that she has “Rosacea”, which leaves red patches on her skin. (Rosacea is a long-term skin condition that primarily affects the face. It results in redness, pimples, swelling, and small and superficial dilated blood vessels. It affects mostly the nose, forehead, cheeks, and the chin.)

Michelle has said that when she decides to get glamorous, make-up artists cover up her face skin with a lighter foundation that makes it look like she has bleached her skin. Michelle has categorically denied bleaching her skin even though the rumors persist.