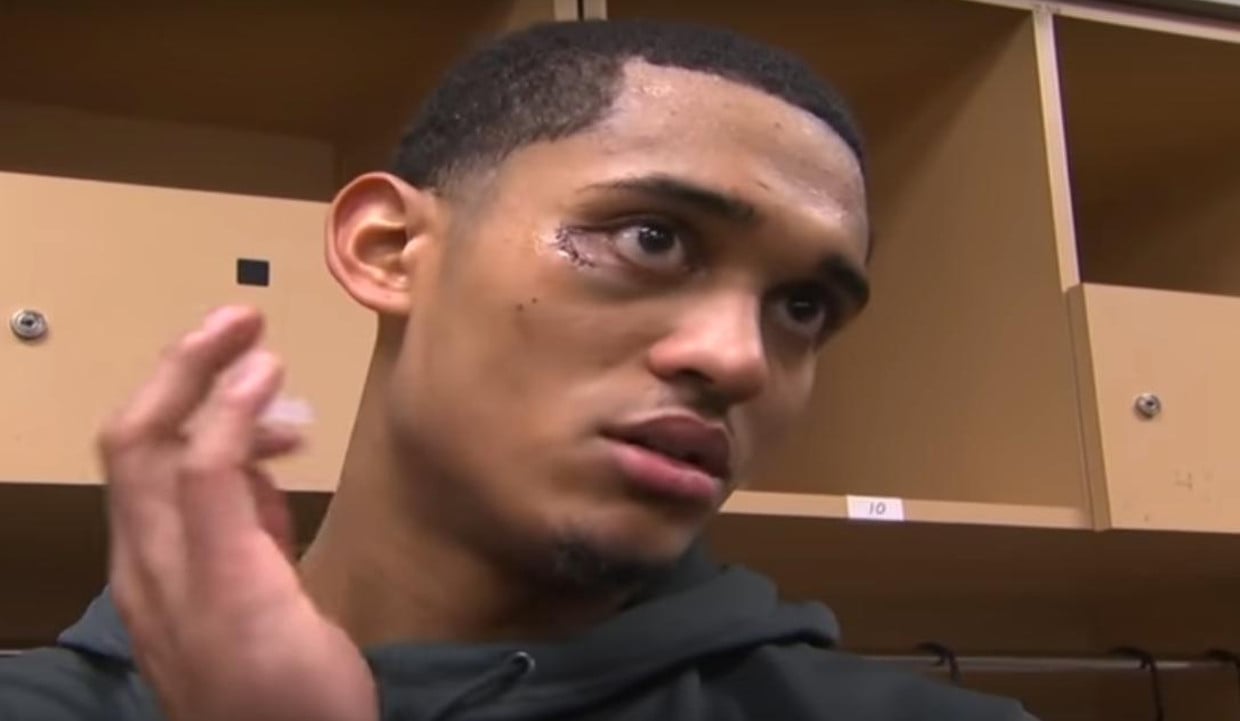 Jordan Clarkson, the Cleveland Cavaliers’ star player, was sent to the locker room during last night’s game. Following his dismissal was the big question about Clarkson’s facial injury. Why was he wearing a huge Band-Aid? What happened to Jordan Clarkson’s face? Find out right here.

We know injuries are part and parcel of a sportsman’s life, but how they got those injuries is what gets fans talking. Jordan Clarkson was elbowed right in the eye, but how did he get the gash? Here’s what you need to know about Jordan Clarkson’s black eye during his game against the 79ers.

It’s All Part of the Game

After Cavalier fans finished wiping away their angry tears following Jordan Clarkson’s exit, they began to wonder why he came to the game with a black eye.

Twitter was abuzz with speculations, with people asking if he was beaten up for stealing somebody’s girlfriend. What!?

The real reason the Cavs’ star player came out with a ginormous Band-Aid on his face and a black eye was because he was elbowed in a previous game.

Those who couldn’t watch the action can see the very moment Clarkson was ejected from the game and why, check it out right here:

As for the eye injury? It was a blink and you miss it moment!

The Filipino-American pro basketball player left the Memphis game in the second half after receiving a strike near his right eye.

The gash soon began bleeding and the Clarkson was rushed to get stitches. He had to get eight or nine stitches, but was determined to get back in the game right after he was done with the procedure.

The Cavs won the game in Memphis that night. So, no harm no foul, right?

Nonetheless, in the locker room interview after the game, Clarkson was “cool” about the whole thing.

For him, this kind of thing is no big deal. “It is what it is, part of the game,” he said. He got back out on the court, scored big, and went home with a win!

Also Read: What Happened to Lonzo Ball? Why Isn’t He Playing?

For a sportsman, injuries are part of the deal. Be it while at practice or when at crunch time during a game.

Fox Sports listed down several injuries that Jordan Clarkson has endured during his games, which include a sprained ankle, knee contusion, and sprained right thumb.

But the recent injury to Clarkson’s face has caught the attention of several fans, especially after he chucked the ball at Dario Saric’s back after the latter had the last dunk against the Philadelphia 79ers. (It was a cheap shot!)

It got him sent back to the bench, of course. But after looking at that tantrum, fans wanted to know if his facial injury was connected to something similar.

Watch the incident between Saric and Clarkson below:

So, if you thought there was more to Jordan Clarkson’s face injury and the bandage behind it, then sorry, folks—there’s no drama to that wound!

However, there was plenty of drama in last game. And, whether or not Jordan Clarkson needs to calm down (like the Twitterverse says) is something we’re leaving up to fans.