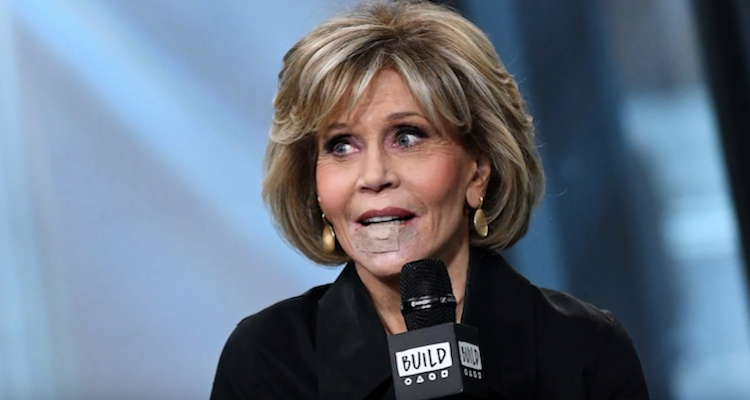 A new season of the Netflix hit Grace & Frankie is almost here and, aside from spoilers form the show, many are asking about Jane Fonda’s lip. What happened to Jane Fonda’s lip? Fans are referring to Jane Fonda’s Jimmy Fallon appearance, where she was still wearing the bandage. Keep reading if you want to learn more about what really happened.

During the Grace & Frankie press tour in New York City, comedic duo Jane Fonda and co-star Lily Tomlin, made an appearance on BUILD Series, where Fonda explained the bandage.

That’s right, Jane Fonda’s cancer is why she had her lip covered, not because of lip surgery. Although the 80-year-old actress has admitted to having plastic surgery in the past, this time it was for more serious reasons.

The Grace & Frankie star also talked about her bandaged bottom lip on Howard Stern’s radio show, saying: “Hey listen, the world is falling apart, what’s a lip?” She confirmed that she had a biopsy and the results looked good, telling Stern: “They did [biopsy it.] I’m going to be fine, thanks.”

Fonda also shared a snap of herself with her co-star, Tomlin, with her hand covering her mouth, and captioned the photo: “With Lily in NY. I’ve found a clever way to disguise my lip bandages from removal of cancer.” Her fans were quick to show their support, with one writing: “I hope you get better soon, I love you,” while another added: “Omg Queen! Get better you’re my hero.”

Fonda later had to explain her lip situation on The Tonight Show Starring Jimmy Fallon, where she also talked about the upcoming fourth season of Grace & Frankie. Spoiler alert: Frankie is declared legally dead for a while!

With Lily in NY. I’ve found a clever way to disguise my lip bandages from removal of cancer

Jane Fonda’s Cancer in the Past

This isn’t the first time the actress has dealt with cancer. In 2010, Fonda had a small tumor from her breast removed, during a routine checkup.

“[It] was a good test, because I always said I’m not afraid of dying,” she told Oprah Winfrey during an episode of Oprah’s Next Chapter in April 2013. “And I wasn’t. I mean, I felt I’ve just joined a family of millions of women who have gone through this. And how interesting. What a journey this is going to be.”

The star also dealt with bulimia and osteoarthritis that same year. Speaking of her experience, she said, “It was in my 40s, and if you suffer from bulimia, the older you get, the worse it gets. It takes longer to recover from a bout… I had a career, I was winning awards, I was supporting nonprofits, I had a family. I had to make a choice: I live or I die.”

The fourth season of Grace & Frankie will be available to stream on Netflix on Friday, January 19.

I freaking love this show. #graceandfrankie