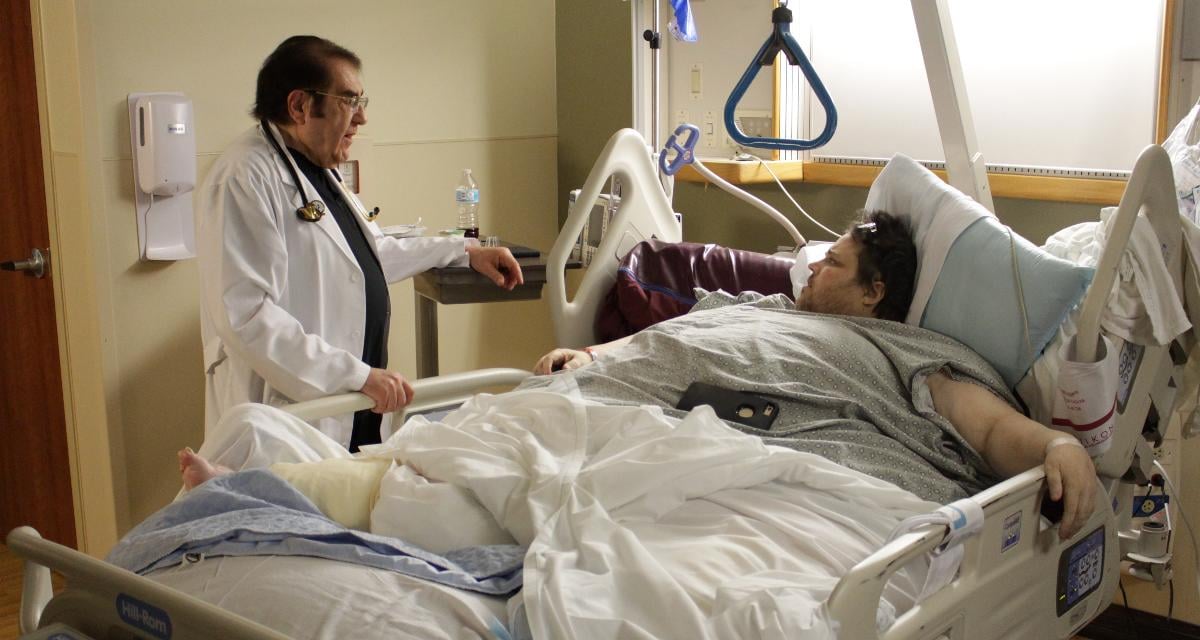 My 600-lb Life is about morbidly obese people and their journey to reduce weight with the help Dr. Younan Nowzaradan. Their emotional journeys leave an impression on viewers. James King was one such patient whose time on the show moved everyone.

Back when James first appeared on My 600-lb Life, he weighed an astounding 791-lbs, making him the heaviest man on the show. He began binge eating when his parents separated, and ultimately, he became obese. The Kentucky native was bedridden. He was seen on the show with his daughter, Bailey and his girlfriend, Lisa by his bedside.

Lisa and James have two children together. But he was not able to fully be a part of his kids’ lives because Lisa was still married when she was pregnant with them. He said the stress of not being with his children full-time was a contributing factor to his weight gain.

His girlfriend recalled that he used to lead an active life. “When me and James first started dating, he was still active, road four wheelers, took the kids riding to the lake area, went fishing a lot,” said Lisa. “He was a very active person.”

A devastating accident encouraged James to lose weight. But he suffered a fall which made him incapable of staying active. “Things got worse when I was 42 because I fell, and I was so big, the fire department had to come and get me up,” he said. “It was one of the lowest moments in my life. And I hurt my ankle really bad, and I had to stay in the bed and rest. But I’m not even sure if it ever healed because that’s the last time I put weight on it.”

According to James’ father, he weighed over 500 lbs by his 30s. But his weight increased uncontrollably since his accident. On the show, a bedridden James had to watch helplessly as his father had to call an ambulance himself when he felt dizzy and nauseous. In the year he filmed the show, fear for his father’s life resulted in him putting on even more weight. But, on the plus side, not being able to help his father motivated him to seek Dr. Now.

To save his life, James’ family helped him make the journey to Houston, Texas, where Dr. Now evaluated his condition. However, like many of the participants on the show, James refused to put in his share of the effort. He had to lose weight in order for the surgery to be safe for him.

He managed to progress from staying bedridden to finally sitting upright. But with Lisa as his enabler who constantly supplied him unhealthy junk food, his weight loss plans met a roadblock. Financial difficulties, false promises, and James’ own stubborn attitude ended with Dr. Now refusing to treat him. Both James and Lisa’s attitudes on the show struck a raw nerve with viewers who flooded social media with criticism.

James went home disappointed. But that was not the end for him. In the final scenes of My 600-lb Life, he was seen going to a physical therapist Rudi Pijnnaken, the president of Physical Therapy International. The show ended and TLC is reportedly not planning to do a follow-up on him anytime soon. But his therapist gave an update on his health.

Those who asked if James is dead will be glad to know that he’s still alive. Pijnnaken spoke to the media outside of the show and said he is on the way to getting the help he needs to lose weight. He was able to make a breakthrough, both with James and his girlfriend, to change his mindset.

It wasn’t easy for Pijnnaken to convince James that a serious weight loss program is his only solution. He is now on the path to recovery and Lisa is more aware of her responsibility as his caretaker. But he’s still got a long way to go.

James can now sit upright with one leg dangling from the bed, which is huge progress for him. So far, he’s sticking to a diet consuming 600 to 800 calories a day. Pijnnaken also assures viewers that he lost weight since they last saw him on the show.

On the personal front, Pijnnaken said that James thoroughly regrets his behavior on the show. He’s now trying to make amends with his daughter and is bonding with her. His goal in the coming future is to lose weight and be able to walk again.

Also Read: Latest Update on James from My 600-lb Life: Where Are They Now