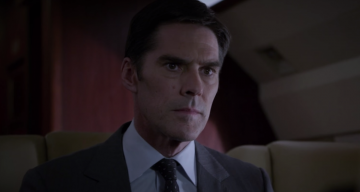 Criminal Minds is a show that has been fairly stable when it comes to its cast, which is a bit amazing when you consider its size. When a character leaves, it’s usually a pretty big storyline event. But in the case of Aaron Hotchner (played by Thomas Gibson), he just kind of disappeared. It really appeared like the character was momentarily written out of the show. What happened to Hotchner on Criminal Minds? Why did Thomas Gibson leave Criminal Minds? We’ve got the answers surrounding the disappearance of both the character and actor.

What Happened to Hotch?

Why did Agent Hotchner leave Criminal Minds? Was Criminal Minds’ Hotchner fired? Aaron Hotchner was on Criminal Minds since the very first season, so when he disappeared in season 12, it seemed a little weird. There was no big story angle or big goodbye. Especially compared to how Derek Morgan (played by Shemar Moore) was written off the show. Viewers definitely knew that Morgan was leaving. Hotch? Not so much. The first mention of the character not returning was in the third episode of season 12. There as a quick line of dialogue that mentions Hotch going on special assignment. Three episodes later, Rossi (Joe Mantegna) announces to the rest of the team that Hotchner went into witness protection after discovering a serial killer stalking his son. And that was the last we heard about Agent Hotchner in season 12. It seemed weird considering he dealt with stalker serial killers before. At the start of season 13, Hotchner was revealed to have retired. Unfortunately, there was a real world reason as to why Hotchner was written off of Criminal Minds.

Aaron Hotchner’s Criminal Minds exit was due to the real world actions of Thomas Gibson. On August 11, 2016, he got into a physical altercation with a writer/producer (allegedly co-executive producer Virgil Williams) which resulted in Gibson’s immediate suspension from the show. Normally in a situation like this, a suspension would have been sufficient. The actor would be off for a few episodes and forced to seek treatment like anger management classes. Unfortunately for the show, this was the second time an incident like this occurred. A number of years earlier, Gibson allegedly pushed assistant director Ian Woolf on set. This resulted in him having to take anger management classes. This time, human resources wasn’t having any of it and Gibson was let go from the show.

Next Wednesday 3/2 episode 16 DEREK! I had a blast directing these two…!

In television, never say never. The return of Agent Hotchner at some point isn’t entirely out of the question. While the character didn’t get a big send off or storyline reason for leaving the show, it also meant that his character is still very much alive. Bringing Agent Hotchner back to Criminal Minds would not be hard to do: The team is stuck trying to discover who their latest serial killer is, time is running out before he kills again, and they need extra help, so in from the cold comes Agent Hotchner with key information. It’s easy to write the character back in, and it’s always something that can be used for a ratings bump. The trickier part is working out the real world differences between Gibson and the show. But in Hollywood, much stranger things have happened.