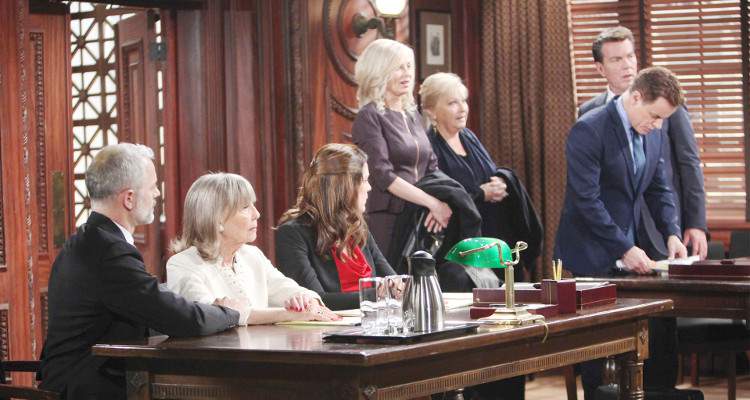 Graham Bloodworth was seen on Y&R last week, and fans hoped that there would be a twist. Unfortunately, he really is dead. While Dina and the Abbotts despised him for his scams, he was about to get rich after killing Dina! Read more about Graham Bloodworth with some extra Young and the Restless spoilers!

What Happened to Graham?

For those who liked the guy that followed Dina everywhere, we have some sad news for you. He met his end as he attempted to inject Dina with chemicals he stole from the Jabot office!

As Dina napped, Graham used the opportunity to poison her. He knows that the court hearing is coming up fast, after which he would lose his share of Dina’s money.

He approaches a sleeping Dina. Once he lifts her hand, she wakes up to find a needle in Graham’s hand, and struggles to free herself from his clutches.

In a shocking move, the syringe, loaded with the deadly chemical, gets injected into Graham’s bloodstream, and he falls to the ground!

Jack and Ashley hurry to Dina’s room and find the door ajar. Upon entering, they find Graham on the floor with the syringe in his hand, but Dina is nowhere to be found.

The duo rush to the police department, and after talking to the chief, they find out Dina was already there.

She confessed to murdering Graham, but the chief doesn’t believe her.

In a twist, he suspects Ashley, as her fingerprints were found on the syringe. She explains that they were only found because Graham had her give it to him so he could take his insulin shot.

But before she can finish, Jack gets a call from the hospital asking the family (including Dina) to rush down. When they get to the hospital, a nurse informs them that despite trying to save Graham, they failed.

He is put on life support, and doctors need a next of kin to take him off. Dina steps forward and gives them the permission.

The end of Graham Bloodworth is a relief to many fans, while some will miss his cunning schemes.

Today on Y&R, Victoria and J.T are in the spotlight. Without spoiling too much for you, let’s just say that Victor thinks that them moving in together is a bad idea. But how far will he go to make his point?

Nikki is not on board with the plan either and lists reasons why they shouldn’t hurry into living together.

The fact that J.T already hurt Victoria is a strong point for Nikki, as she and Victor both feel he might hurt her again.

The couple in question, however, don’t want to hear the naysayers and are convinced that they are made for each other. They choose to let the past stay in the past, and insist on continuing with their living arrangement.

Elsewhere, Hilary will be egged to go on a date with Ravi, which may not turn out to be a good night for either party. Billy totally sabotages the date (we know why), and all in all, the episode will wrap up leaving fans wanting more—as always!

It's a whirlwind week full of hasty decisions, prying friends and tough choices. Tune in this week on #YR!