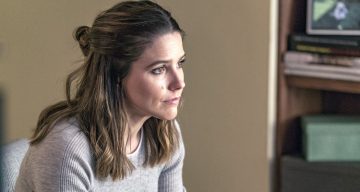 At the end of Chicago P.D. season 4, we were left wondering about the fate of Det. Erin Lindsay. The season 5 premiere answered our questions but didn’t give us peace. Two episodes in and viewers can already feel the absence of Sophia Bush this season. Did Sophia Bush leave Chicago P.D.? Or will she be in a new show in the Dick Wolf Chicago franchise? Here’s the reshuffled 2017 cast of Chicago P.D. after Sophia Bush’s departure.

Chicago P.D. season 5 premiered with a tribute to Det. Erin Lindsay, from when Hank Voight (Jason Beghe) takes her off the streets as a troubled teen to her relationship with Det. Jay Halstead (Jesse Lee Soffer). In the season 4 finale, Halstead was just about to propose, when Lindsay announced she accepted a job with the FBI in New York.

“Look, it was time for her to move on. It just was. You need to make peace with it,” Voight advised Halstead in the premiere episode where the emotions after Lindsay’s departure really hit home. Halstead is shown returning to an empty home with pictures of him and Lindsay while Voight talks to a therapist about saying goodbye to someone he thought of as a daughter.

New Chicago P.D. showrunner, Rick Eid said the tribute was a best way to acknowledge that Lindsay was an integral past of the show. Following the exit of previous showrunner, Matt Olmstead, Bush also announced that she wouldn’t be returning after season 4. The reason for her departure wasn’t stated, but it is reported the actress left of her own accord.

Erin Lindsay has been in Chicago P.D. for four seasons and also appeared in Chicago Fire, Chicago Med, and Law and Order: SVU. “Her not being there is something people notice and comment on,” said Eid. “But when actors leave, you move forward and you dramatize what you have in front of you playing with the actors we have.”

With the exit of a key character, the Chicago P.D. cast lineup has undergone a few changes this season. The Intelligence Unit welcomed Det. Hailey Upton since Tracy Spiridakos was promoted to series regular. The premiere also laid the groundwork for Halstead’s new romance with Upton.

While Bush never disclosed the reason for leaving the show, the burning question in fans’ minds is if she’ll return to the Chicago-verse in one of its crossovers again. There was talk that she’d make a brief return to wrap up her storyline, but there might be a wait.

Eid said it’s too early to tell if Bush would return to the show saying, “There’s nothing specific on the table right now so I don’t really have a comment on that right now.” But he added that it’s too soon to write off Erin Lindsay just yet. Fingers crossed, it won’t be the last time we see Det. Linsday!