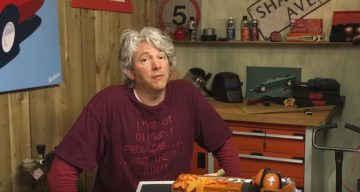 Wheeler Dealers is a super-popular auto makeover show loved by gearheads all over the world. Mike Brewer and Edd China became household names in its 13-season span. But season 14 premiered sans Edd China. Former For the Love of Cars host, Ant Anstead replaced China as the resident mechanic on Wheeler Dealers. But fans of the show are saddened to see the genial mechanic that is China absent from the show. Why did Edd China leave Wheeler Dealers? Here’s what he had to say about his exit from the show.

Wheeler Dealers, which originally began on the Discovery Channel in the U.K., became a global success thanks to Mike Brewer and Edd China. Brewer, a car enthusiast, would purchase an old used vehicle and turn it over to China, a mechanic, to renovate it before they resold it.

China became famous as not your run-of-the-mill reality TV mechanic. While the usual automotive savior we see on TV is a tattooed, loud, expletive-hurling caricature whose creativity is meant to show off, China stood out. He was jovial, cool, didn’t create unnecessary sparks for dramatic effect, and was a creative genius with a respect for the cars he worked on. When China took the reins, viewers felt they got what they wanted out of an auto show, which is all about cars.

Needless to say, gearheads were heartbroken to learn that after 13 seasons, China would be leaving the show. The 46-year-old mechanic explained his reasons through a video on his YouTube channel.

He explained that his chemistry with Brewer turned a genesis of an idea into a lucrative brand from the sheer size of the audience alone. Discovery U.S. and Velocity Channel saw the opportunity to expand the brand. After season 12, Velocity replaced Attaboy TV, the show’s original studio, with Discovery Studios in California and that’s where the problems started.

According to him, Velocity found China’s workshop sequences “too difficult to make.” As Edd said, and many would agree, his shop scenes were the driving force of the show and while they might have been hard to shoot, cutting back on it wouldn’t do any good. Instead of reducing on his workshop fixes, China decided to bow out of the show.

The Dealer’s Side of the Story

Brewer was quick to refute China’s claims that he left over the format being changed. A video of the dealer in Wheeler Dealers circulated the Internet where he accused his former co-host of not being gracious.

“When he did some very bad things it meant that Discovery channel just couldn’t work with him. So they gave him the option to leave, and he took it,” said Brewer. China’s former partner also claimed that the mechanic let success get to his head and left so he could do his own show.

After China disclosed why he decided to leave, fans were furious at the network but Brewer bore most of the brunt. The car enthusiast and his family have even received death threats. So, one can see where Brewer is coming from.

Edd China was quick to respond to Brewer’s claims with another YouTube video. He first said that he and Brewer remain good friends though things are a little strained at the moment. Brewer contacted China and told him about the threats his family received after he left the show and China didn’t like it one bit.

Reminding fans that it was their chemistry that made the show so good, he asked them to continue to support both of their future ventures. While Brewer is now teamed up with Ant Anstead on Wheeler Dealers, China is hoping he might get a show of his own one day.

While we wait for Edd China to fix cars on TV again, we can enjoy Wheeler Dealers season 14 on Velocity Channel every Wednesday at 9:00 p.m. EST.