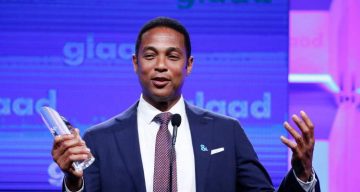 After CNN anchor Don Lemon was missing from our screens for a few days last November, viewers began to wonder if he was fired from the network. So, is Don Lemon still on CNN? Yes, he is as it was soon revealed that he was just on vacation. Many were relieved to see that he was back on the New Year’s Eve broadcast—and found love! And we’ve got the scoop!

A couple of months ago, fans wondered if Don Lemon was still on CNN. The anchor was off the air for a bit, and many speculated about his absence.

Rumors began to circulate, and many feared that his absence meant that Don Lemon was fired! However, that was not the case. And fans were more than happy to see him again, just in time for the ball to drop!

Lemon publicly came out of the closet in 2011, but details of his love life were never really revealed. That is, until New Year’s Eve when he invited his boyfriend, Tim Malone, on camera and gave him a sweet New Year’s kiss!

The pair shared a loving kiss while millions of people watched as they rang in 2018. This certainly put fans at ease knowing they’d see their favorite anchor back on their screens. So, in short, Don Lemon was not fired.

So, what happened to Don Lemon then? We have everything you need to know about the news anchor, right here!

Sealed with a Kiss

On New Year’s Eve last year, Lemon had a few drinks and spoke about his hopes for the coming year saying, “I need a little more balance in work/life. I may be open to a relationship this year.”

Dear Summer, I miss you….

Now one year later, the 51-year-old news anchor’s wish came true! As he rang in 2018 with fellow anchor Brooke Baldwin, Lemon said, “I found love,” and later proceeded to share a kiss with his boyfriend, Tim Malone!

Although Lemon spent most of 2017 keeping mum about his new relationship, he later confirmed that he actually met Malone in 2016. And many speculated that they met at the bar on New Year’s Eve.

No argument about that!

When people starting freaking out over Lemon’s absence back in November, Lemon and Malone went on a vacation! With no word on-air about where the news anchor was, many viewers assumed he was fired.

When you realize there’s less than 30 minutes left in the show and tomorrow is Friday. #TGIF ? @benfergusonshow

However, thanks to Lemon’s Instagram account, fans were quickly assured that not only was he still employed at CNN, but that he was also working on his 2017 resolution! The couple vacationed in Miami Beach, leaving New York’s cold winter air behind them.