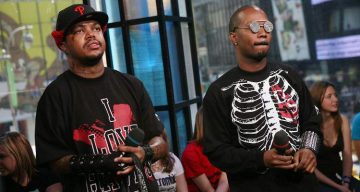 DJ Paul suffers from a disease called Erb’s palsy, which resulted in his right arm not completely growing, making it look deformed. He typically wears a cast to cover his arm, especially when on stage, and fans still flock to see him perform. Many don’t even realize his ailment, not that it takes anything away from his immense talent! Learn all about him here!

When DJ Paul performs, people start to really move. The rapper, songwriter, DJ, producer, and entrepreneur from Memphis, Tennessee is the founding member of Three 6 Mafia, and half-brother of the late rapper, Lord Infamous. DJ Paul’s concerts, both solo and with Three 6 Mafia, are mostly sold out. However, those who have seen him live often wonder if DJ Paul has a fake hand. What happened to DJ Paul’s arm? Here is what you need to know about what happened to DJ Paul.

DJ Paul’s right arm is deformed, and he likes to call it his “baby arm.” As a child, he has Erb’s palsy, which stunted the growth of his right arm, which is why he covers it in a cast.

The Music Just Gets Better

People often wonder how DJ Paul plays with just one good hand. Not one to let his passion and talent go to waste, he has so much dedication to his music that sometimes he reportedly only gets three hours of sleep! He likes to keep busy, working with his various companies by day and making music at night. According to DJ Paul, “I feel like if I’m not working, then I’m losing and I’m not really giving my life what I should be giving.” So, next time you see that DJ Paul or Three 6 Mafia are playing near you, make sure to buy tickets! Despite the hand he was dealt, DJ Paul has made his mark in the industry by showcasing his immense talent!