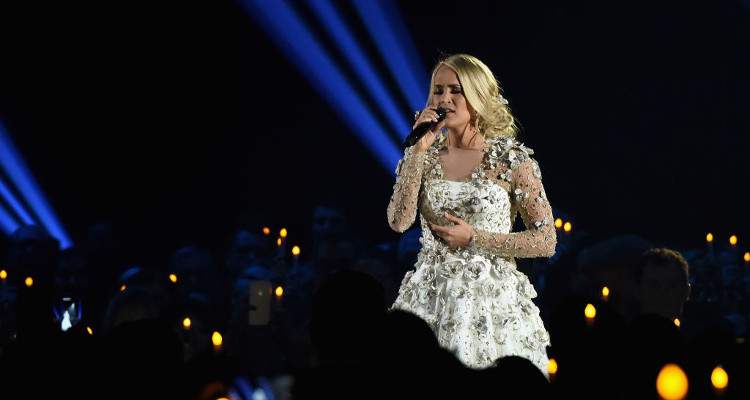 American singer-songwriter Carrie Underwood injured herself back in November 2017 and suffered a broken wrist, abrasions, and few cuts. But she’s kept quiet on the whole ordeal, and has stayed away from pictures. So, what happened to Carrie Underwood?

The songstress recently spoke out on the topic. She revealed that she had also suffered a face injury and is still dealing with the impact that it caused. She even mentioned that she may not look the same when she’s ready to show herself again. Read on to find out more about Carrie Underwood’s face injury and how it happened.

Carrie Underwood’s songs are widely famous and loved by all. She is no stranger to the world of music and is a famous songwriter, country singer, and actress. Underwood rose to fame in 2005 as the winner of the fourth season of American Idol.

Underwood’s album, Some Hearts, was released in 2005 and became the best-selling solo female debut album in the history of country music. It was also ranked as the best-selling country album in the last 10 years. Underwood went on to win three Grammy Awards for this album, one of which included the award for the Best New Artist.

In November, just two days after co-hosting the 2017 CMA Awards, it was announced that Carrie Underwood took a hard fall just outside her home. Back then, all we heard was that she suffered a broken wrist and a few bruises.

However, the accident was far worse than she may have lead on.

Carrie Underwood recently spoke out about her injuries to E! News through a letter she wrote to her fan club members. In it, she revealed that in addition to her broken wrist, she received around 40 to 50 stitches on her face the night the accident took place.

Underwood explained, “Most of you know, that I tripped and fell and broke my wrist in November. I’m still doing regular physical therapy for that, but all is coming along. There is also another part of the story that I haven’t been ready to talk about since I have still been living it and there has been much uncertainty as to how things will end up.”

I am so excited that I was recently given the #CMA International Artist Achievement Award! I truly have the most amazing fans…from all over the world! I couldn't be more grateful when I get to hop on a plane to go play for some of them! Thank you all for showing up with your incredible love and support and thank you #CMA for this award! This is truly special!

She went on to explain, “It’s crazy how a freak random accident can change your life. In addition to breaking my wrist, I somehow managed to injure my face as well. I’ll spare you the gruesome details, but when I came out of surgery the night of my fall, the doctor told (my husband) Mike that he had put between 40 and 50 stitches in. Now, here we are 7 weeks later and, even though I’ve had the best people helping me, I’m still healing and not quite looking the same.”

The country star continued by expressing her gratitude to everyone who’s been a part of her life through this difficult phase. She added, “I honestly don’t know how things are going to end up but I do know this: I am grateful. I am grateful that it wasn’t much, much worse. And I am grateful for the people in my life that have been there every step of the way.”

“I am determined to make 2018 amazing and I want to share things with you along the way. And when I am ready to get in front of a camera, I want you all to understand why I might look a bit different. I’m hoping that, by then, the differences are minimal, but, again, I just don’t know how it’s all going to end up,” she explained.

Underwood ended her statement with a thank you and said, “I’m so thankful for the doctors, nurses, family & friends who’ve been taking such great care of me.”

Carrie Underwood’s Instagram presence is quite prominent, but it’s evident she hasn’t posed in front of the camera since prior to the accident.

However, just today, she posted an update on her wrist and thanked her doctors for fixing it. In the post (a picture of her x-ray), Underwood mentioned that now her wrist is “good to go.”

We’re pretty sure that the audience will continue to love and support the singer, despite the way any injuries may have come to make her look. After all, beauty is best seen from the inside out.

We can’t wait to see Carrie Underwood back in action. For now, here’s wishing her a speedy recovery.