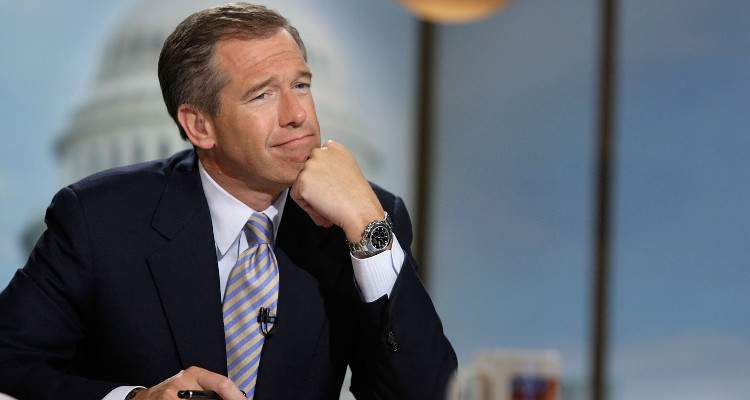 With Matt Lauer fired from NBC, old stories of his time on-air (many of which were painful to watch) have been rehashed. One such time was his interview with disgraced journalist, Brian Williams. Looking back on it now, there seems to be a “pot calling the kettle black” theme occurring and people are remembering the old face of NBC News. Where is Brian Williams now? Read on to find out!

Matt Lauer was NBC’s most celebrated anchor who had some sort of influence in making decisions. Ironically, he competed with another disgraced veteran anchor, Brian Williams for the position. Lauer was also NBC’s go-to guy to confront people accused of wrongdoings. His mind-numbing interviews with Bill O’Reilly and Brian Williams are making everyone cringe today. What happened to Brian Williams? The anchor’s career nearly ended for lying on air. Though the news of his scandal finally died down, many are still wondering, where is Brian Williams now? We’ve got the scoop.

What Was He Thinking?

Brian Williams spent a decade of his career in NBC as anchor and managing editor of Nightly News. Within his first year of joining, he earned praise for his coverage of the 2004 Asian tsunami and Hurricane Katrina.

During his tenure at NBC, he and Lauer were reportedly locked in a rivalry to become the network’s supreme anchor. Their feud allegedly came to a head when Williams refused to go on Today to introduce his groundbreaking Edward Snowden piece.

Despite his burgeoning career, Williams apparently shot himself in the foot (rhetorically speaking) for resorting to the biggest journalistic taboo: Lying on air.

He was covering the 2003 Iraq War when he spiced up the report by “misrepresenting” events. On a broadcast of Nightly News,  he claimed that the military helicopter he was traveling in was forced down after being hit by an RPG. Soon after it aired, a flight engineer on board one of the three helicopters disproved Williams’ story.

When NBC further investigated, they found he retold the story on several occasions. His fib ended with him getting suspended for six months and he apologized for lying, while Matt Lauer took advantage of his rival’s absence and rose up the NBC’s ranks.

But it didn’t end there. His war correspondent scandal prompted people to look into earlier statements made by Williams. Sure enough, it was found that he chronically embellished stories on-air to boost his persona.

He compounded the Iraq War story by claiming that he went to Baghdad at the start of the war with SEAL Team 6. He bragged to David Letterman that they sent him a thank you note with a piece of the fuselage from the helicopter that crashed in Osama Bin Laden’s courtyard. FYI: SEALs do not embed journalists.

In his coverage of Hurricane Katrina, he claimed to have seen armed gangs outside his hotel, “his first corpse floating down Canal Street” from his window, slept on a mattress in a stairwell, and that he was struck with dysentery but refused an IV and then miraculously recovered on his own.

He repeatedly claimed he was there when the Berlin Wall came down on November 9, 1989. However, he wasn’t anywhere near the wall. NBC’s Tom Brokaw alone covered the fall while Williams arrived there on November 10.

As more of his lies came to light, Lauer interviewed Williams in 2015 towards the end of his suspension. Williams sat across Lauer, apparently contrite, saying his fall from grace had been “torture.” However, “Looking back it has been absolutely necessary. I have discovered a lot of things.”

Perhaps what he discovered was that he’s an exception in an unforgiving industry. He got a second chance at NBC where other journalists would have lost their careers. He began covering news for MSNBC and was soon chosen as chief anchor of MSNBC’s The 11th Hour.

A struggling NBC was then revived by the return of Andrew Lack. The NBC chairman and Williams decided that a special nightly broadcast during the elections were necessary, especially in a political climate when news broke late in the evening. Through the show, the 58-year-old is determined to earn the trust of viewers and his colleagues once again.

The 11th Hour was originally billed as a temporary program meant to end after the 2016 presidential election. However, it went from four nights a week to hour-long broadcasts five nights week, and recently completed a year. At the same time, it led the way for NBC to extend live programming beyond primetime hours.

Currently, Williams’ past still haunts him and he never fails to mention how much he regrets his actions. “What happened was an acute time in my life, and I had put a lot of people through a lot. I knew I needed to get back,” he said. “I am grateful for every day.”

He once expressed his wish to return to anchoring Nightly News, but has since found that The 11th Hour suits him better. “We all stand on great things here—and second acts are possible, with a little spiffing up.” Even if Twitter lambasted him for calling a missile strike “beautiful,” everyone is a little more forgiving of Williams.

Brian Williams is definitely making hay for the second time. But the same can’t be said about his former colleague. In the wake of Lauer’s termination, Williams’ name has been floated for his possible replacement at Today. There is speculation that Lack might use this opportunity to bring Williams back into NBC’s prime programming.

At the end of Williams’ and Lauer’s 2015 interview, the former Today host said he believed in “second chances.” But unlike Williams, Lauer won’t be getting a chance for redemption at NBC or anywhere else. NBC’s avid viewers have found a news anchor more untrustworthy than Brian Williams.