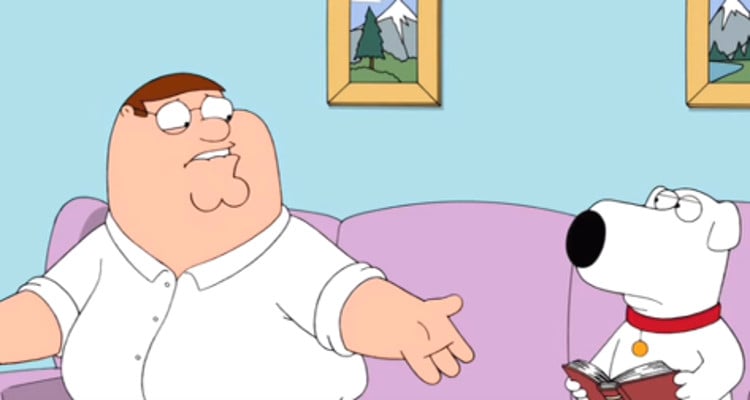 It is Christmas time on Family Guy and considering what happened in the past, the most unexpected things are possible! Fans may remember what happened to Brian on Family Guy in season 12, and how a Christmas miracle brought him back. If you’re new to the show, keep reading to find out more!

The Griffins celebrate the holiday season like no other family, so you can expect the unexpected and believe that nothing is impossible. As the ghosts of Christmas past, present, and future visited Peter Griffin on last night’s episode, many are remembering one Christmas four years ago that was life-changing for the Griffin family and Family Guy fans. It was the episode where Brian died on Family Guy!

What happened that Christmas on the show? How did Brian die on Family Guy? We’ve got the scoop right here!

Let’s first take a look at the beloved character of Brian on Family Guy.

Brian may be a dog, but he is one of the biggest characters on the show and a significant part of the Griffin family.

Voiced by the show’s creator, Seth MacFarlane, Brian is a furry white dog with human attributes, who works as a struggling writer trying to make a name for himself in the literary world.

Brian shares a close friendship with Stewie, the Griffin’s youngest son, and the two go on many adventures together. Stewie once even signed them up to join the army!

What Happened to Brian?

In season 12, while the two are getting ready to play outside, Brian is killed just outside the Griffin home. A car hit him, and he later died of his injuries in the hospital.

The family had a funeral for Brian, and Peter even gave a moving eulogy to the dog who was his best friend.

Family Guy fans did not take Brian’s death very well. The episode caused an uproar on social media with fans even starting a petition to bring him back. Even replacement pooch, Vinny, couldn’t help fans deal with the grief they faced over the loss of Brian!

How the hell can you just kill off #BrianFromFamilyGuy like that #SethMacfarline? You could've killed… http://t.co/ucCpyRYliX

MacFarlane did not expect such strong reactions after the episode of Brian’s death aired.

“We were all very surprised, in a good way, that people still cared enough about that character to be that angry. We thought it would create a little bit of a stir, but the rage wasn’t something we counted on,” he said.

The Resurrection of Brian Griffin

Two episodes later, the creators of Family Guy pulled off the impossible like only they could, as Brian was resurrected and back on our TV screens!

Stewie used his ingenious time machine to go back in time and save Brian from getting hit by the car. We are so thankful Stewie’s broken time machine could be fixed!

MacFarlane later explained on Twitter that they planned on bringing Brian back just to share a valuable lesson: Never take your loved ones for granted.

And thus endeth our warm, fuzzy holiday lesson: Never take those you love for granted, for they can be gone in a flash.

“Oh and hey… thanks for caring so much about the canine Griffin. He is overcome with gratitude,” he added in another tweet.

Last night’s Christmas episode made us all nostalgic about Brian’s return from the dead, and it will forever be a Christmas miracle Family Guy fans will remember!

According to MacFarlane, there’s really no getting rid of one of the shows most popular characters! “I mean, you didn’t really think we’d kill off Brian, did you? Jesus, we’d have to be f*****g high,” he said. We agree!