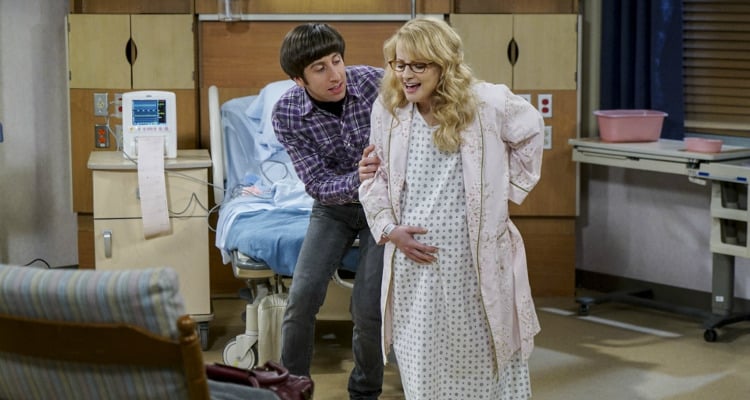 The Big Bang Theory season 11 premiered on September 25, 2017. Since the start of the show in 2007, it has become one of the funniest sitcoms on CBS—possibly on TV, in general! Fans definitely can’t get enough of it, so it’s no surprise that it keeps getting renewed season after season!

One of the most beloved characters on the show is Bernadette, Howard Wolowitz. It was revealed in season 11 that she was put on bed rest, which got viewers worried. So, why is Bernadette on bed rest? We have all the details, so keep reading to find out!

In the season 10 episode titled, “The Birthday Synchronicity,” Bernadette is taken to the hospital, where she gives birth to her and Howard’s daughter, Halley Wolowitz. Further down the road in season 11 in the episode titled “The Proposal Proposal,” she is surprised to find out that she is pregnant with the couple’s second child!

Howard and Bernadette find a surprise in their hot tub tonight! ?#BigBangTheory

But apparently, Bernadette and Howard are not very excited about the idea of having a second child so soon after their first! Because of the pregnancies being so close together, Bernadette is advised to go on bed rest until the baby comes to term.

Is Bernadette Pregnant in Real Life?

Actress Melissa Rauch, who plays Bernadette, is not pregnant—at least not anymore! It was announced on July 11, 2017, that she and her husband, Winston Rauch, were expecting, and on December 4, 2017, Rauch took to Instagram to share the news of her daughter, Sadie Rauch’s birth.

According to reports, Rauch’s pregnancy experiences haven’t all been good, as she penned an essay for Glamour magazine detailing her struggles with infertility and a previous miscarriage.

She explained that due to her miscarriage, she struggled with sharing the news of her pregnancy. “All I could think about was another woman mourning over her loss as I did, worried she would never get pregnant again, and reading about my little bundle on the way,” she said, adding, “It felt a bit disingenuous to not also share the struggle it took for me to get here.”

It's a girl! Congratulations to @themelissarauch and her husband Winston Rauch on the birth of their daughter! #BigBangTheory

But things seem to be working out for her just fine now, and with the arrival of her precious baby girl, it seems Rauch is now nothing but smiles! After the birth of her healthy baby girl, Rauch wrote, “I am beyond over the moon to share that our beautiful baby girl, Sadie Rauch, has arrived and our hearts are bursting at the seams with love for her. I will never take for granted the difficult road it took to get here. To those on that road: I’m sending you so much love today and always.”

While her character on the show is pregnant, it could have been to accommodate a then-pregnant Raunch during filming. Right now, she is enjoying spending time with her new baby girl. Congratulations to the happy couple!