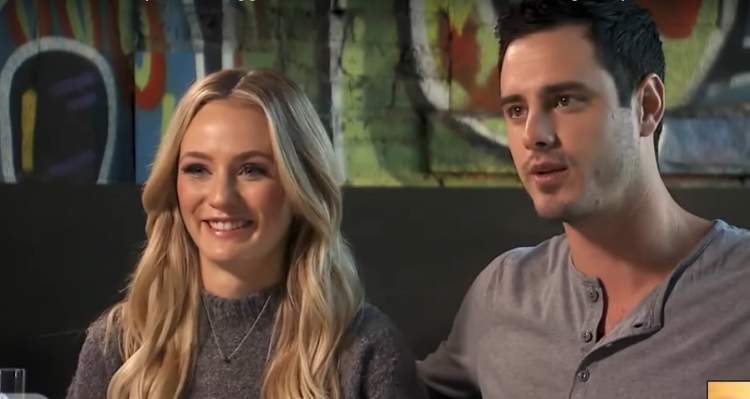 People did a double take when they saw The Bachelor 2016’s Ben Higgins on The Bachelor Winter Games last night. What happened to him and Lauren Bushnell?! Were they not supposed to get married? Unfortunately, the couple split up in May 2017. Read on to find out why the couple broke up!

People who saw the premiere of the new ABC show The Bachelor Winter Games on February 13, 2018, must be wondering why many of the contestants are there. Especially Ben Higgins, who seemed to have found love on The Bachelor season 20.

People still remember that he got engaged to Lauren Bushnell and the couple were supposed to live happily ever after! The two were even the focus of their own show following So, why is Higgins back on a show where the main objective is to find love? What happened to Ben and Lauren? We have the details as to why Ben Higgins and Lauren Bushnell broke up!

Rumors of a Breakup

After getting engaged, the couple took had a spin-off series, Ben & Lauren: Happily Ever After?, that aired on Freeform for a single season. Rumors swirled as late as January 2017 that they were on the verge of breaking up, but Higgins denied them at that time, “I am still extremely lucky to be able to share life with her and be by her side.” However. come May 2017, the lovebirds were singing a different tune.

Higgins and Bushnell told People magazine in a joint statement: “It is with heavy hearts that we announce our decision to go our separate ways. We feel fortunate for the time we had together, and will remain friends with much love and respect for one another. We wish nothing but the best for each other, and ask for your support and understanding at this time.”

Why Did Ben and Lauren Break Up?

So, what were the reasons for this trouble in paradise? A source close to Bushnell revealed, “They just wanted different things. They had been struggling for a while…It was a mutual break up for the most part. I think Ben would have kept wanting to make it work, though. It’s really sad. They’re both such great people, honestly.”

Also Read: “The Bachelor Winter Games” Cast: All Set to Raise the Temperature in Chilly Vermont!

Another possible reason leading to their split was that Bushnell only found out that Higgins told JoJo Fletcher he loved her in the Fantasy Suites only when the season finale aired. She admitted that it took her “months to get over the surprise.”

Bushnell revealed, “Post-filming was more of an emotional roller coaster than the actual show. For a long time, I was really angry for being blindsided. And that resentment and anger affected our relationship much longer than it should have.” Higgins also named outside pressure on their relationship as one of the reasons why it didn’t work out.

Higgins and Bushnell tried hard to make their relationship work and even attended counseling at his church to dissolve their rift. In the end, it was love’s labor lost!

Some people are asking if Higgins and Bushnell are still together. Unfortunately, the answer is no! The couple officially split up in May 2017. That is precisely why Higgins is on The Bachelor Winter Games. Well, maybe second (or is third?) time’s a charm!