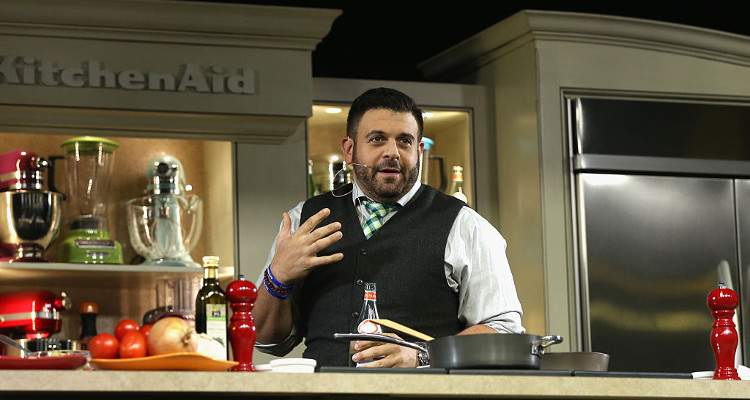 A new season of Man v. Food will premiere on December 4, 2017 with more food adventures across America. The hit show rebooted in August 2017 and its continued success prompted producers to bring it back for another season. After its original run ended in 2012, there have been many changes to Man v. Food. For starters, Adam Richman no longer hosting the show.

When the new season of Man v. Food premiered in August, Adam Richman was nowhere to be seen. Instead, actor and food aficionado, Casey Webb took over the Travel Channel show, and will continue to host the new season in December.

Adam Richman, who taught himself to cook and is a trained sushi chef, was the host of Man v. Food when it first premiered in 2008.

The show was a great success and raked in high ratings. And who can forget Richman’s charming personality and passion for food! Over four seasons, he took on challenges from spicy food to five-pound sandwiches. He traveled to various cities across America and found local establishments with unique dishes and challenges.

Richman gained popularity because of the show and received a number of endorsement and media deals. He was a spokesman for Zantac during season 3, and wrote America the Edible: A Hungry History from Sea to Dining Sea, which was published in November 2010.

Why Did Richman Leave?

After not signing on for the show’s reboot, everyone wanted to know what happened to the Man v. Food guy. Why did Adam Richman retire from the show? He decided to give up competitive eating in January 2012, which meant he would no longer be able to take part in the show. He reportedly gained a lot of weight and went into depression.

“One fact remains: I am out of the food challenge game & while I love how that phenomenon has caught hold worldwide, and love hearing about your culinary conquests – I have ‘hung up my competitive fork’ so to speak. I now seek to explore, to learn and to share what I’ve learned about food, places, people and travel itself & make that information enjoyable and accessible to everyone.”

So, where is Adam Richman now? After leaving the show in 2012, he went on to host a few other food shows, including Adam Richman’s Best Sandwich in America in June 2012, and Adam Richman’s Fandemonium in July 2013. Both shows aired for only one season.

In 2014, Richman found himself in the middle of controversy after Instagram users took offense to a post about his weight loss. He reportedly told people who took objection to his post to “Grab a razor blade and draw a bath.” The post was deleted, but the debut of Man Finds Food was delayed by the Travel Channel.

Man Finds Food finally made its television debut in 2015 and the second season was renamed Secret Eats with Adam Richman. His newest television food venture has him exploring hidden food menus and secret recipes across the world

Adam Richman’s Instagram feed is full of his gastronomy adventures, and his new show.

LIFE IS TOO SHORT TO EAT ANYTHING THAT ISN'T AWESOME. October 15 I'm hosting One of the classic events at the New York Wine and Food Festival – THE OYSTER BASH! Tickets are nearly sold out! Get yours ASAP! Let's meet, eat, drink & end hunger with #NYCWFF DELICIOUSNESS AWAITS! (Click link in Bio!)