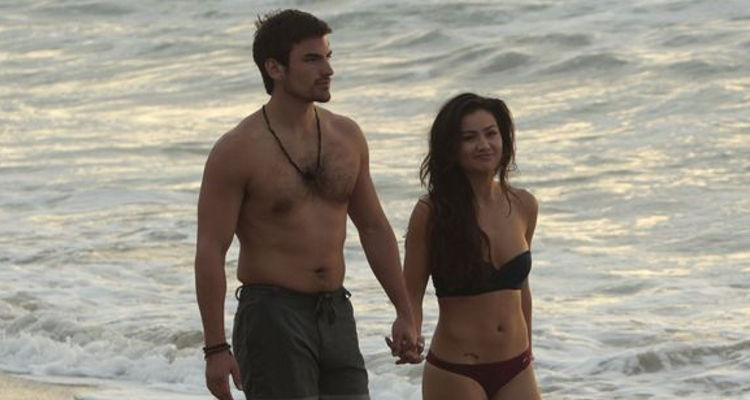 “Vizzy” is no more. That’s right. It came as a shock to viewers, as well as to all the other couples, that Vinny and Izzy (the strongest couple in paradise) ended their relationship last night! A very heartbroken Vinny attempted to talk to Izzy, and pleaded with her to let go of her attraction to Brett. He couldn’t understand how she could throw away what they had built, over a guy who just walked in and “looked good” to her. Izzy sat in the treehouse with Vinny trying to explain through her tears, but the damage was done and Vinny, also in tears, told her he wanted to leave paradise. Vinny told her that he normally didn’t open up to women, but he felt that there was such a strong connection between them, he was hoping to leave paradise with her and start a life together. It was hard to watch Vinny’s heart break on camera…

Owner of a Broken Heart

Izzy tells Vinny that she gets a ‘feeling’ with Brett that she doesn’t get with him. She told the other girls that the moment Brett walked into paradise, her heart skipped a beat, as he was the exact image of the “perfect guy” she had in her head. Seeing that his efforts to convince Izzy into giving up on Brett are futile, Vinny decides to leave the show as he cannot take the fact that Izzy would throw what they have away so easily, especially based on Brett’s looks. Izzy then clings on to Vinny, not wanting him to leave but Vinny’s mind is made up. Later, Izzy confesses that she feels guilty because Vinny is leaving because of her.

Sex and the Island

The breaking up of the strongest pair on the show sends shock waves through all the other participants. Now, they are all questioning their own relationships. Winner of the previous Bachelor in Paradise, Jade and Tanner, made a surprise visit to Paradise, where they got to select one of the couple to go on the date. After interviewing each couple, they chose Jared and Caila, and the couple got to experience a romantic beach-side dinner, followed by a late night dip in the ocean (in their skivvies) and a racy makeout session! Meanwhile, Ashley is sprawled on her bed knowing that she is losing Jared to Caila. She feels that Caila is too perfect, and that she just can’t compare to her level sex appeal. However, Ashley is not ready to give up Jared just yet, but Jared now thinks of her as just a ‘friend.’ Ashley and Caila have a showdown, and Ashley makes it clear that she is not backing off.

Strange things happen when you are with attractive members of the opposite sex, especially when you’re stuck on a beautiful island. With relationships being formed, and emotions running high, there’s bound to be some serious drama. That’s what happening on Bachelors in Paradise, and let’s be honest, it’s what keep us viewers coming back for more! Check out the Bachelor in Paradise after show called, After Paradise. It’s a weekly one-hour show where the recent episodes of Bachelor in Paradise are discussed with cast members and celebrity fans. It features comments from viewers, deleted scenes, outtakes and exclusive extra content. Expect more fireworks ahead in next week’s episode, so stay tuned!

For more on Bachelor in Paradise, simply click on:

Carl King: 5 Facts to Know about the Bachelor in Paradise

What Time Does “Bachelor in Paradise” Start?