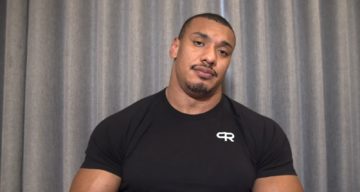 The list of bodybuilders and powerlifters accused of alarming acts recently continues to grow. Larry Wheels is yet another bodybuilder facing disturbing allegations of violence. Wheels’ ex-girlfriend has accused him of abuse, but he is fighting back against her claims. If you’re confused about this drama in the strongman world, we’ve broken down the details here for you.

Powerlifting sensation and aspiring strongman Larry Wheels had been dating another bodybuilding star, Chilasa King. They broke up after five years together and Wheels moved on with a new woman in his life, Nicole Drinkwater.

However, King took to her YouTube channel on July 25 to reveal why she and Wheels broke up…and it was explosive!

In the video, the fitness trainer alleged that Wheels had abused her physically and mentally.

In her video, King claimed that Wheels had repeatedly cheated on her with both and men and women. This has led many followers to ask if Larry Wheels is gay. But there’s no information to confirm this at all; it remains just a rumor stirred up by King’s allegations.

King also alleged that her ex subjected her to mental abuse for which she sought professional help to come to grips with.

The female bodybuilder also alleged that when she confronted Wheels about the cheating, he physically abused her.

In the YouTube video, Chilasa King shows screenshots of texts between her and Larry Wheels, as well as with the alleged other woman.

In the video, King narrates a particular incident in 2016, when she claims that things escalated between her and her then-boyfriend Wheels. She plays audio recordings of their argument in which King asks him about his cheating again. In the audio, you can hear King seeming to scream for Wheels to get off her.

She alleges that, during their argument, Wheels struck her with his fists.

She then plays more audio recordings, in which a distressed-sounding King says she’s holding a knife for protection.

In another clip she plays in the video, Wheels is supposedly calling the cops.

King’s accusing him of trying to turn the situation on her by claiming she threatened him with a knife.

At this point, these are only allegations and no charges have been filed against Wheels or anyone else. Nonetheless, this incident really shook the bodybuilding community.

Kenny Boulet, aka Kenny K.O., is a fitness star and YouTuber. He jumped into the controversy surrounding Wheels and seemingly declared Wheels was guilty.

After King’s video, Larry Wheels was flooded with questions about whether the allegations are true or not. Given the seriousness of the claims, he didn’t stay quiet; instead, he responded in a YouTube video of his own.

“First and foremost, the accusations made against me are simply not true,” said Wheels.

“I’d honestly like to let this go, but these are serious accusations that deserve a serious response,” Wheels said in the July 28 video.

He went on to admit that he did engage in some arguments, as King mentioned.

The powerlifter also said that in the five years he and King were supposedly together, they actually dated on and off.

Wheels claims he didn’t cheat on King and that he was seeing another woman after they broke up. He says that he didn’t assault his ex during their argument.

About the 2016 alleged incident King spoke about in her video, Wheels said that the police examined the audio recordings of their argument. However, no evidence of abuse was found and no charges were filed.

Wheels’ current girlfriend, Nicole Drinkwater, defended her man in a video of her own.

Amid King’s accusations, it was speculated that Wheels cheated on King with Drinkwater. But Drinkwater said she met Wheels after he broke up with Chilasa King.

After Wheels gave his side of the story, Kenny K.O. faced a good deal of backlash for jumping to conclusions. The response prompted him to briefly switch his Instagram to private. Kenny K.O. has since apologized to Wheels on Instagram and YouTube.

Don’t Miss: What Happened to ProJared? Allegations of Cheating and Sexual Misconduct Hit the YouTuber