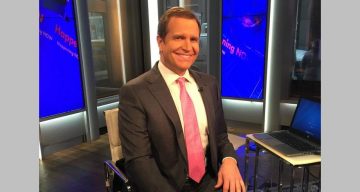 American TV news anchor Jon Scott may have said goodbye to his show Happening Now, but he certainly has not retired! Is Jon Scott still with Fox News? If you were wondering what happened to him, then you’ll be happy to know he’s not going anywhere! We have everything you need to know about Jon Scott’s new assignment!

Jon Scott, 59, has been hosting Happening Now with Julie Banderas for a while now, but it looks like this host is ready to move on. Scott took to Twitter to announce his last day in the Happening Now studio and said that he would now be seen on the weekends, instead.

Where Is Jon Scott Going?

The Fox News veteran, who has been associated with the channel for 22 years, has a new assignment now—to host Fox Report Weekend. The show will air Saturdays and Sundays at 7:00 and 6:00 p.m. EST, respectively.

Jon Scott was one of the first few to report the tragic September 11, 2001 terror attack on the Twin Towers. He remained composed throughout the eight hours of reporting while he was talking about the first crash. He also very calmly reported the second one.

Scott has also brought news to the viewers through rain and shine, literally! He has covered the devastation of hurricanes and the war in Afghanistan. Additionally, he has been the face for royal weddings and space shuttle launches!

Scott announced his departure from the weekday news show. And his co-host, Banderas, even popped a bottle of champagne to celebrate his great contributions to the channel.

It’s a final wrap for @HappeningNow Please join @JulieBanderas and me tomorrow at 11 AM Eastern for our closing program, plus a few words about what’s next for us both at @FoxNews!

Jon Scott has already taken his place as a breaking news anchor on Fox Report Weekend, so his fans haven’t missed him too much. The Emmy Award-winner for news writing has been at the bottom of every breaking news story to date, which makes him the perfect candidate for weekend reporting!