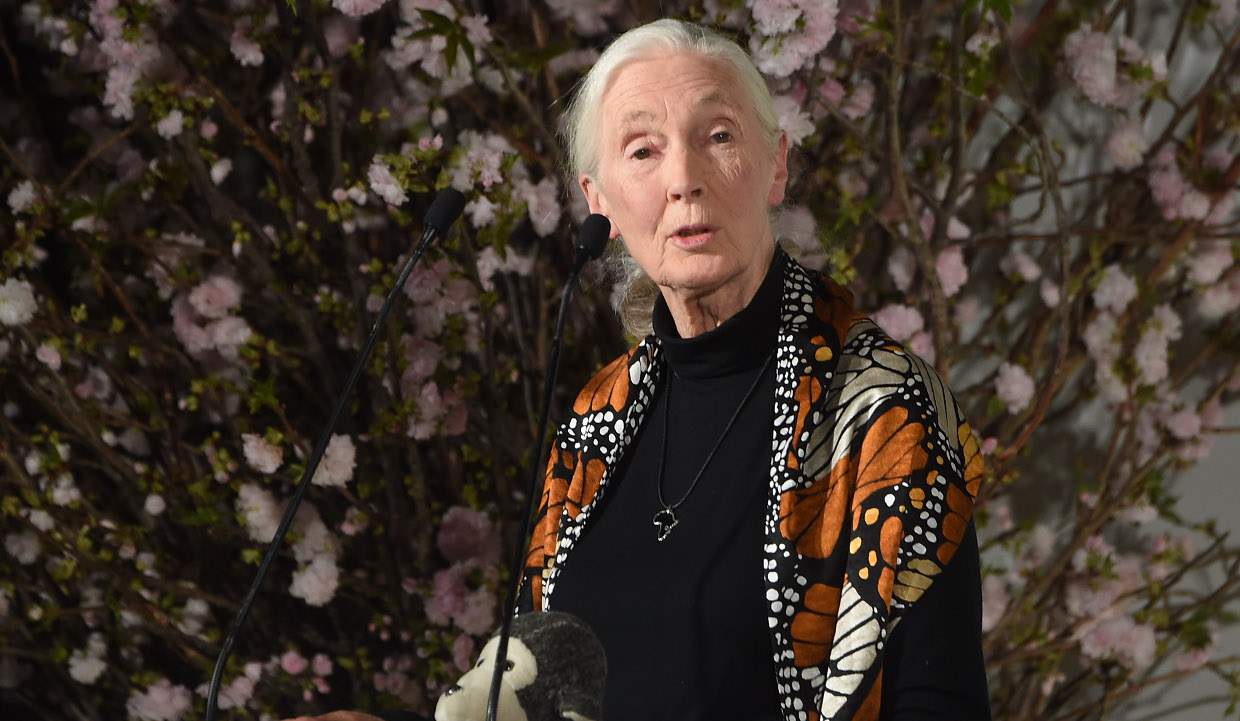 If you watched the National Geographic documentary on Jane Goodall and are wondering if it came out after her death, then think again. Jane Goodall is still very much alive, and she’s not done with chimpanzees just yet!

At 83, Jane Goodall is looking better than ever! She has shown the world that women are as strong, smart, and determined as men. She spent countless hours studying nature and the nature of jungle animals and dedicated her life to one species in particular. Here’s more on Jane Goodall, the famous “chimpanzee lady.”

Jane of the Jungle!

Goodall’s fascination towards monkeys, chimps, and apes started after her father gifted her a stuffed toy chimpanzee. She named her toy chimp Jubilee, and thus began her love towards the apes.

Goodall did not have a formal degree, but her love for primatology and anthropology led her to go on great adventures to study the wild animals.

It was the ’60s and people were still unaware of the mysterious world of chimpanzees. One woman packed her bags, left her sophisticated British lifestyle behind, and set out on a journey to realize her dreams and true passion.

Goodall made an initial trip to Kenya through a friend, Louis Leakey.

He was a Kenyan archaeologist, and he soon made Goodall his secretary. She was to help him with his idea that apes provided an important link to the behavior of early humans.

She accompanied him and later went to the Tanzanian national park, Gombe Stream National Park, where she became the first of what would become known as the “Trimates.” This trip was what changed her life for good, and brought Jane closer to the apes.

After Tanzania, she completed her PhD in ethology (a study of animal behavior) from Newnham College.

“A sense of calm came over me. More and more often I found myself thinking, this is where I belong. This is what I came into this world to do.” Jane Goodall explains on her official website www.janegoodall.org.

Her academic achievements are as many and as valuable, which include recognition from numerous colleges in USA, England, Tanzania, Scotland, and more.

She has been on various advisory boards for universities that delve into the study of nature and has mentored countless numbers of men and women who share her passion.

Jane Goodall was formerly known as Baroness Jane van Lawick-Goodall, as she was married to Baron Hugo van Lawick, a Dutch nobleman and a keen wildlife photographer. They got married in 1964.

However, it was not meant to be, and Goodall divorced from Hugo after 10 years together, while raising their son, Hugo Eric Louis.

She then remarried in 1975. Tanzania’s national park director Derek Bryceson had her heart, but this marriage was also short-lived, as he died five years after they wed.

There are several things Jane Goodall is doing even today. She is an inspiring orator, and her countless speeches on her research and findings have motivated millions.

Here is one such talk from Goodall about how chimpanzees are different from us:

Jane, the documentary on Jane Goodall, is a compilation of unseen footage from her adventures in Gombe.

In the documentary, Goodall is accompanied by her husband the Baron, and the couple is seen enjoying their time studying and noting down the important aspects and their findings regarding the ape behavior.

Goodall gets close to the apes, plays with their babies, understands their feeding patterns—she basically lives with them and they truly seem to trust her.

The documentary is about empowering women across the globe. To all the women out there who did things others couldn’t, who proved facts others suppressed them for, and who have risen above the dust to make the world a better place.

Jane Goodall is one such woman, and there is no other feeling but pride attached to her name.