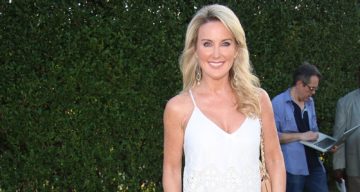 Heather Childers attends the 2016 Michael Bolton Charities Fundraiser, "An Evening Under the Stars" at a Private Estate on August 20, 2016 in Bridgehampton, New York. (Photo by Sonia Moskowitz/Getty Images)

Former Fox News personality Heather Childers drew audiences to Newsmax since joining the conservative media platform in 2020. However, she’s recently been MIA on the American Agenda with Bob Sellers. That has led to many queries on social media, with most asking what happened to Heather Childers. After her abrupt exit from Fox News, her absence on Newsmax TV has raised concerns among followers. But, sources close to this anchor have revealed that it isn’t all bad news behind Childers’ absence.

Heather Childers began her career working at various TV news stations in North Carolina and Georgia before getting hired as a reporter at Fox News Channel in 2010. The University of North Carolina at Charlotte alum rose to national prominence as the host of the first hour of Fox & Friends in 2017.

She sparked controversy in the early phase of the COVID-19 pandemic when she showed up to work while visibly ill. She revealed her negative COVID-19 tests on social media and repeatedly made public appeals to be allowed back to work.

A Fox News spokesperson announced in July 2020 that the network and Childers had “parted ways.” Later in November, she announced her new job at Newsmax TV, co-hosting the American Agenda alongside Bob Sellers.

Thank you so much ❤️❤️❤️

However, she has been absent from the network recently. That has sparked queries about what happened to Heather Childers and speculation that she was fired from Newsmax.

A few sources close to Childers revealed the reason behind her absence. And it has to do with her longtime boyfriend, Tom Zban.

Tom Zban is a radiologist in Charlotte, North Carolina. They are low-key about their relationship on social media, but Childers has shared glimpses of him on her official social media pages.

In March, Childers announced her engagement to Zban through Instagram. She hasn’t revealed any wedding details so far.

Back in April, a Twitter user said that Childers is leaving Newsmax to get married. Childers replied to that tweet with a thanks and confirmed the news.

Some missed the tweet back then. A few others who are caught up wished Heather Childers well on her newlywed journey and hope that she will return to broadcasting soon.