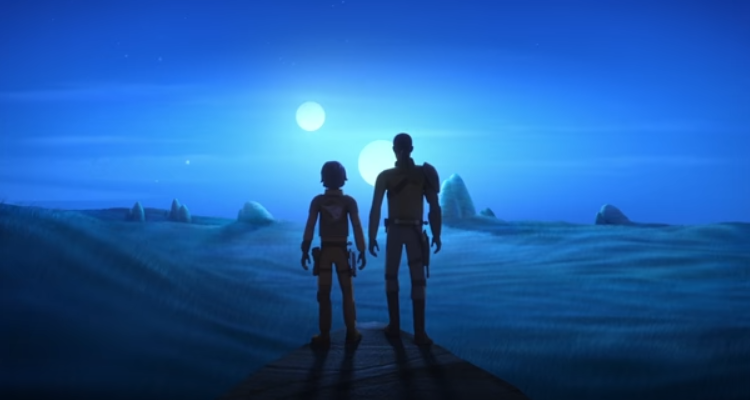 Ever since its premiere in 2014, fans have been closely following Ezra’s journey on Star Wars Rebels. Ezra’s life has been adventurous, to say the least!

In Monday’s (March 5) season 4 finale, fans got a glimpse of what the future will bring for the Rebels. But it also led to uncertainty after Ezra brings his Jedi training to fruition and makes a choice to save his friends and the planet, Lothal.

What did Ezra do? Did Ezra die in Star Wars Rebels?

We have everything you need to know about what happened, right here!

Who Is Ezra Bridger?

If you’re new to the series, here’s a little introduction to the character of Ezra Bridger.

Voiced by Taylor Gray, Ezra is a 15-year-old street urchin and con artist with Force abilities. He is street-smart and has led the life of a small-time thief. His parents were put in prison by the Empire and killed in a prison revolt, which Ezra finds out later.

At first, Ezra’s only desire is to find his parents. But then he realizes his true potential with the help of a Jedi Padawan, Kanan Jarrus.

Kanan takes in Ezra as an apprentice and helps him fulfill his true calling in the Jedi order. He is then inducted into the order, and Yoda’s voice guides him to make his own lightsaber.

After Kanan’s blindness prevents him from continuing to lead the Ghost crew, Ezra steps in as the new leader.

As the series progresses, Ezra realizes his true mission is to help the Rebels fight against the Empire.

Executive producer Greg Weisman talked about Ezra’s character and said, “We see this whole series very much through Ezra’s eyes. As his eyes get opened to what the Empire’s capable of, his eyes are opened to the fact that there are people who care, who are trying to fight the good fight, and he becomes one of them.”

What Happened to Ezra Bridger in Star Wars Rebels?

As the series builds up to the finale, Ezra is left with two choices by General Thrawn—to let the people of Lothal die or to surrender to the Empire.

So, Ezra decides to give himself up to General Thrawn. But sensing that the general has no intention of keeping his word, he comes up with a backup plan.

Ezra then summons the Purrgil (giant space whales who can fly through hyperspace) to destroy the Empire’s blockade of Lothal and stop Thrawn.

Everyone watches as Ezra follows in the footsteps of Kanan and sacrifices himself for his friends and the planet. He is taken away by the Purrgil and Thrawn is nowhere to be seen.

Victory for the Rebels!

Fans who were suspecting Ezra Bridger’s death in Star Wars Rebels will be relieved to know that may not be happening just yet.

Even though there’s no news from him, we know that Sabine Wren has a new task. He has to find Ezra with the help of Ahsoka Tano and bring him back. So, that gives us hope that Ezra is still alive!

The series ended with a lot of uncertainty and fans are dying to know what will happen next. There’s no confirmation of what’s coming, so all we can do is wait and watch.

Star Wars Rebels has been an incredible series. We have loved watching Ezra’s rise from an underdog to the savior of Lothal, all while fulfilling his Jedi calling—what could be more inspiring than that?!